The NAR reported existing home sales jumped 4.2% from last month and inventories are still a very tight 5.1 months of supply for May 2013.   Existing homes sales have increased 12.9% from a year ago.  Volume was 5.18 million against April's 4.97 million annualized existing home sales.  This is the highest volume level since November 2009 when the first time home buyer tax credit gave an artificial jump to sales.  Prices are now through the roof and even the NAR admitted the prices of homes are too high and blames artificially low inventories of homes for sale as the reason. 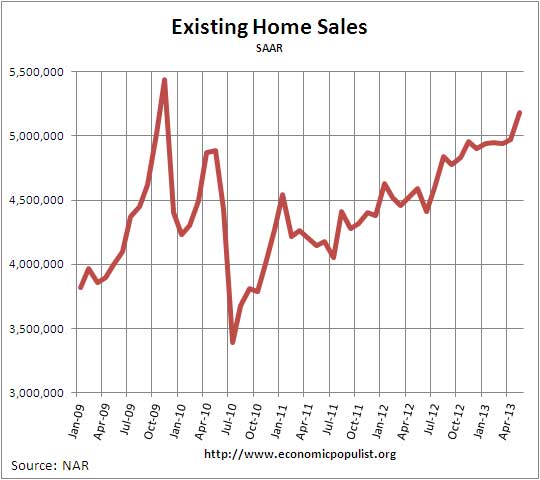 Inventory of existing homes decreased -1.9% for the month, a 5.1 months supply and inventory is down -21.5% from a year ago.  Listed inventories are also down -10.1% from a year ago.  Short supply partially explains the increasing prices.  NAR claims buyer traffic has increased 29% from a year ago.  Time on the market is at bubble year levels.  From the report:

Forty-five percent of all homes sold in May were on the market for less than a month. The median time on the market is the shortest since monthly tracking began in May 2011; on an annual basis, a separate NAR survey of home buyers and sellers shows the shortest selling time was 4 weeks in both 2004 and 2005.

The national median existing home sales price, all types, is up, now at $208,000, a 15.4% increase from a year ago.  Median price has also broken the $200,000 barrier.  Even more eerie, the last time there were 15 consecutive months of median existing home price increases was also the height of the housing bubble, March 2005 through May 2006.   This is also the sixth month in a row for double digit median price increases.  This is the largest jump in annual price increases since October 2005.  It is looking like we have a price bubble.

The average home price for May was $255,300, a 11.2% annual increase.  The bubble like price increases that may very well have much to do with the Federal Reserve mortgage backed securities purchases, known as quantitative easing.  The Fed's move is keeping mortgage interest rates at record lows.  This is the first time NAR has mentioned homes are becoming unaffordable.

According to RealtyTrac, foreclosures are down 28% from a year ago.

Distressed homes – foreclosures and short sales – accounted for 18 percent of May sales, unchanged from April, but matching the lowest share since monthly tracking began in October 2008; they were 25 percent in May 2012. Fewer distressed homes, which generally sell at a discount, account for some of the price gain.

First-time buyers accounted for 28 percent of purchases in May, compared with 29 percent in April and 34 percent in May 2012.

The correct Shakespeare quote is actually Double, double, toil and trouble, but for the purposes of a returning housing bubble, we'll use the misquote.

june sales & prices should be interesting..the Fed seems to have lost the handle on the interest rate pump..

And of course this is one thing of benefit to real buyers, so pop it goes.

Back in the day, neighborhoods were built on semi-corruption free government, almost everyone in your neighborhood, town, city, and state working jobs that could support a wife and 2 kids, and being able to do so on 40-50 hours/week. Now, it's all a shell game of bullsh* and headline chasing noise. What's the Fed up to? What's gold at? What's Abe up to in Japan? Will Jamie Dimon take a 24 karat dump or 18 karat only? Will Ben Bernanke work at Government Sux or JP Morgan after he leaves the Fed? Will the feds and states claim unemployment at 7-8% and dropping while everyone in the real world knows we're at 20-30% and stagnating or rising?

Home sales are just another rigged market. NAR and big bansktas want prices to go up, they'll limit supply and voila. And vice versa. What's really funny/insane is all of this crap destroys any faith in markets, government, banks, realtors, big business, education, honesty, etc. This nonsense destroys society. The long-term effects are obvious - things have been getting worse for most people for a long time now.

Jobs and good salaries used to be the sole determining factor of a nation's welfare. Now we have to see if Zuckerberg is ripping off more people and invading more private lives for $ to see how the US economy is doing. Are more corporations making $ in sweatshops in Somalia and Bangladesh? Are people laundering more $ in real estate? Will a foreign country get exclusive access to our national defense systems because "our corporations" and "our government" met in Davos and decided that was good for quarterly profits, and patriotism is so 18th Century?

They have created a society of masters and slaves, the elites and the serfs and this government is out to make it worse.

Sorry I'm been short on the articles. Just having disaster after disaster that takes priority.