The October unemployment report is yet another disappointment, with not enough jobs to keep up with population growth. The jobs situation has been dismal for 46 months. While the average time being unemployed decreased -2.72% from last month, the length of unemployment is still at record highs. The average time being unemployed decreased from 40.5 weeks to 39.4 weeks, but last month was a record going back to 1948. That's over 9 months for the average length of unemployment. The below graph is the median time for being unemployed over the last 20 years. This means half, or 50% of the people unemployed, found a new job in this amount of time. This month the median duration, or half, to be out of work decreased -6.31% to 20.8 weeks. That means there is overall lost income by being out of work longer and we haven't even discussed how the new jobs are paying way less and most of the jobs being created are low paying jobs.

There is a vast deviation from the average and the median duration of unemployment. This means there are huge percentages of the unemployed who simply cannot get a break, being out of work for 2, 3, 4 years and cannot land a damn job. Yet of those not in the labor force wanting a job, that number increased 162,000 to 6,403,000, a 2.6% increase from last month. This is when the non-institutional civilian population increased 198,000 from September. People are clearly falling off of the official unemployment count who need a job. Below is the graph of those not counted as unemployed, who answer the survey question do you want a job, yes. Below is the seasonally adjusted graph of those not in the labor force, reporting they want a job, as a percentage of the non-institutional civilian population. 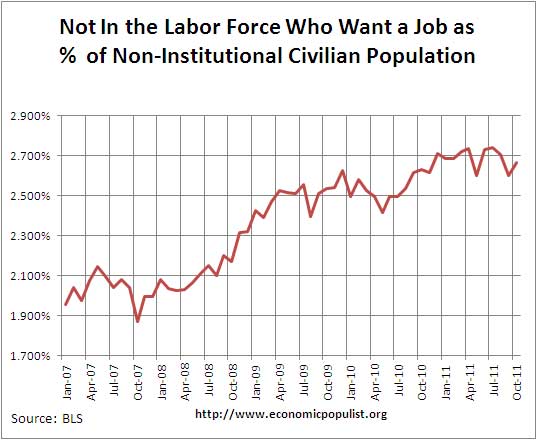 Those who want a job, as a percentage of not in the labor force, increased from 7.25% to 7.44% in October. As a percentage of the total civilian non-institutional population, this group is 2.67%. That's pretty huge considering the unemployment rate is 9% and the ratio of those considered part of the labor force to the total non-institutional civilian population is 64.2%.

A service EP can do Working America is to expose the biggest layoffs and to show who actually generates jobs. The numbers announced are large and even like the Roman Legions decimating the
villagers. there is a need to answer the question - who are the generals in the war on the middle class?

In the U.S Corporate hiring list, there is no geography of where the hiring is. These are announcements, candidate beware! There is churning, and outsourcing afoot everywhere.

The dates are imporant and GE, IBM, HP, Dell, I sincerely doubt they are hiring Americans from their patterns. They are probably bringing in foreign guest workers or those are facilities abroad and so on.

The financial sector offshore outsourced like mad as well, and GE? Seriously?

Caterpillar announced a new 1000 workers, they closed some offshored plant and brought it back, but this is a drop in their bucket.

Layoffs - Challenger Gray as reported on ABC news site.
Hiring - CNNMoney but the content the timing is vague
http://money.cnn.com/galleries/2011/pf/jobs/1101/gallery.best_companies_...

The Layoffs are claimed to come from Challenger Gray from the ABC New Site - but CG does not report by company. See http://www.challengergray.com/press/PressRelease.aspx?PressUid=195 October Data

The Hirings from CNN Money : Http://money.cnn.com/galleries/2011/pf/jobs/1101gallery.best_companies_most_hiring.fortune/index.html

No Dates on the Hiring Timeframes - these are 'annual announcements'.