"The referendum of 5 July will stay in history as a unique moment when a small European nation rose up against debt-bondage.”  Yanis Varoufakis, Finance Minister, Greece.
Sixty percent of Greek voters rejected the financial bailout proposal offered by the European Union (EU) in Sunday’s referendum.  The EU-IMF proposal relied heavily on austerity, which would have taken current financial hardships to nightmarish proportions for the vast majority of Greeks.

The Cyprus Parliament rejected a bail out plan that would have seized almost 10% of private savings deposits and used the money to bail out Cyprus banks.  The vote was almost unaminous.

Size matters when it comes to bank bail outs and European politics.  In the most brazen bail out deal yet, the citizens of Cyprus just had their savings seized to give the money to the banks.  I kid you not.  Here is the Eurogroup statement:

The United Kingdom's bond rating was just downgraded by Moody's from AAA to AA1, in part due to the U.K.'s austerity measures which repressed economic growth.

Greece is in turmoil. Austerity demands and debt have ravaged the nation. In spite of this, the pro bail-out and corresponding austerity political party just won the election:

The pro-bailout New Democracy party came in first Sunday in Greece's national election and could gather enough support to form a pro-bailout coalition to keep the country in the eurozone.

The world's eyes have been on Greece and their elections. The reason is one party wanted to default and leave the Eurozone. The two main parties are the New Democracy and the Syriza. The New Democracy party are the conservatives and support the European bail outs, austerity demands and want to stick with the EU and the Euro. The left Syriza wants to default, get out of those austerity demands and leave the Eurozone.

Most are reporting the New Democratic Party of Greece can form a parliamentary coalition.

Traders in New York this morning were greeted with this happy headline from The Wall Street Journal:

Yes indeed, the Dow Jones index is set to open at least 70 points higher because the Greek parliament approved the additional austerity measures demanded by the European Union, the European Central Bank, and the International Monetary Fund. In exchange for €130 million in a second bailout by the “Troika”, as the three lending institutions are called, Greece will have to cut its minimum wage by 22% and the government will have to lay off an additional 150,000 workers. This is in a country that is in its fifth year of recession, with an official unemployment rate of 21%. Business has virtually collapsed, with many private sector companies on the verge of bankruptcy. The health system is so starved for funds that a bacteria resistant to all medicines is raging through hospitals, forcing the chronically ill to decide whether to even risk seeking professional care. Poverty is reaching extreme levels and is well-entrenched among what used to be the middle class. Children are sent to school so hungry that they are fainting in the classrooms. As of last night, the crowds that were storming through Athens and other large cities no longer were content to throw rocks at the police; Molotov cocktails were used to set at least forty buildings in Athens on fire. The police in Athens, facing crowds estimated from 80,000 to 100,000 people, were forced off Syntagma Square, and appeared to have run out of tear gas. Journalists described the business center of Athens as a war zone. The country is slipping into social disorder, if not anarchy. But stock markets in Europe were up today on the happy news that the Greek parliament approved the additional austerity measures.

Like a bad mini-series, the European non-events events just keep rolling on in. Here are the latest ones.

From the Financial Times, leaders failed to create a new treaty.

Leaders of the European Union’s 27 countries failed to agree to change the EU’s treaties in order to implement tighter fiscal rules and instead chose to create a new intergovernmental treaty which will likely have less teeth and be negotiated only among 23 of the bloc’s members.

Despite the division – which will leave Britain and Hungary out of the new pact, with the Czech Republic and Sweden still weighing participation – Mario Draghi, the European Central Bank president, signalled his approval, a key vote of confidence that could allow the ECB to move more aggressively in eurozone bond markets.

The U.K. was a major veto and the reason for the failure. Reuters:

"This is a summit that will go down in history," said Sarkozy. "We would have preferred a reform of the treaties among 27. That wasn't possible given the position of our British friends. And so it will be through an intergovernmental treaty of 17, but open to others."

Greece is heading down the road of austerity, now selling off it's land and assets to pay their creditors. Literally the beautiful beaches of Greece are for sale.

Where have we seen this before? A crisis to advance a privatization agenda.

The mountains look on Marathon - / And Marathon looks on the sea; / And musing there an hour alone, / I dreamed that Greece might yet be free. - Lord Byron 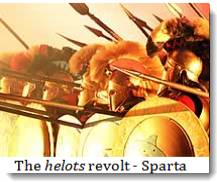 The Greek parliament voted to approve this week what might justly be titled “The Debt Enslavement Act of 2011”. Under this act, everyone in Greece gets to be a helot, and how bad could that be? It’s not like the old days. In ancient Greece the youth of Sparta participated every autumn in the Krypteia, a sort of military training exercise in which Spartans would hunt down and kill helots without fear of legal reprisal. The helots were Greeks too, just the wrong kind of Greeks – lower class, servile, tied to the land. Slaves, in effect.

Modern day slaves aren’t tied to the land anymore – they are tied to their bank. So are governments, for that matter. How often have you read in the past few weeks that unimaginable economic consequences await us if Greece defaults? Angela Merkel said so. So did Nicolas Sarkozy, and now the new IMF head, Christine Lagarde, has said that the Greek opposition party needs to unite with the majority Socialist party to approve new tough austerity measures for the country. If they do, the IMF, the European Union, and the European Central Bank will release the last tranche of a previously-agreed loan. These three noble institutions, called “the Troika” by the press, are basically telling Greece “We are going to default on our loan commitments to you if you don’t deliver even more cutbacks, tax increases, asset sales, and unemployment than you previously promised.” The Troika, no doubt, does not enjoy trafficking in pain and suffering on a national scale, but apparently it is the only collateral they can get. The irony is, if Greece agrees to deliver more collateral – maybe we should call it collateral damage – they don’t really get any money. It just passes through Greece straight to the banks.