You f---ing Americans. Who are you to tell us, the rest of the world, that we‟re not going to deal with Iranians. -- SCB‟s Group Executive Director

Laudering money for rogue nations and drug cartels seems to be par for the course. The latest scandal is this bomb: a British bank has been laundering Iranian money for over a decade. The New York State Department of Financial services filed an Order Pursuant to Banking Law § 39, which that describes willful and egregious violations of law by Standard Chartered Bank, aka SCB. The above quote is part of the documentation against SCB. 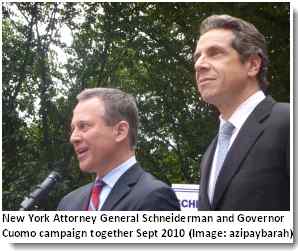 Gretchen Morgenson of the New York Times just published one of the few feel good stories in months following the 2008 financial crisis. She describes a possible day of reckoning for the perpetrators of the 2008 crisis and much of the pain that has followed.

"The New York attorney general has requested information and documents in recent weeks from three major Wall Street banks about their mortgage securities operations during the credit boom, indicating the existence of a new investigation into practices that contributed to billions in mortgage losses." New York Investigates Banks’ Role in Financial Crisis New York Times, May 16 Even under the relatively optimistic economic forecast included in the 2011 Federal Budget, unemployment will remain at the 9.8% rate through the end of this year, dropping to 8.9% in 2011 and 7.9% in 2012.  In other words, after four years since the first stimulus, unemployment will remain at recessionary levels. To be fair, the passage of a jobs bill – and the promised efforts to pass further stimulative elements (aid to states, highway money, public works, etc.) – lends some slight hope that this catastrophe might be averted.

However, as we’ve seen with the jobs bill, it’s incredibly hard and slow to get even the smallest elements of a jobs bill through Congress; this makes it highly unlikely that sufficient actions will be taken to bring down the unemployment. However, I do think that it is possible to push through more aggressive jobs measures at the state level in heavily Democratic states that aren’t hamstrung by the Senate’s rules and the Blue Dog Caucus. As I’ve discussed in my 50-State Keynesianism and Job Insurance series, I believe that it’s possible to reform state governments to be successful anti-recession institutions, complementing Congressional action.

Today, I’ll take California and New York as two heavily Democratic states that are also large enough to have a significant impact on the national economy.

In many ways, the past forty years of Anglo-American history have been marked by a revolution of a few who live by wealth upon the many who live by labor. If the first half of the 20th century can be seen at the revolt of the masses, this latter half has been a revolt of the elites. Nowhere is this more apparent than in delinking of increases in labor productivity from growth in real wages. I think that this graphic illustrates what's been happening pretty clearly.

Given this the plea to "Save the Bankers" which will appear on the front page of the style section of tomorrow's New York Times is all the more galling.

The article begins by explaining how $500,000 a year (the CEO salary cap propose by the Obama administration) is simply not enough to keep them in the manner to which they have become accustomed.