The number of people on food stamps in the United States exploded in May 2011. 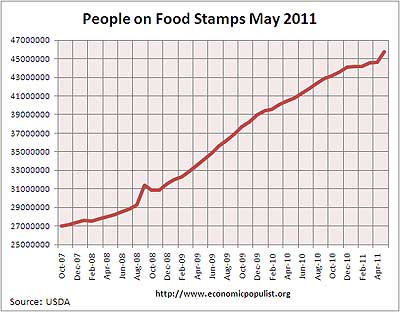 The number of people on food stamps in the United States is still growing. 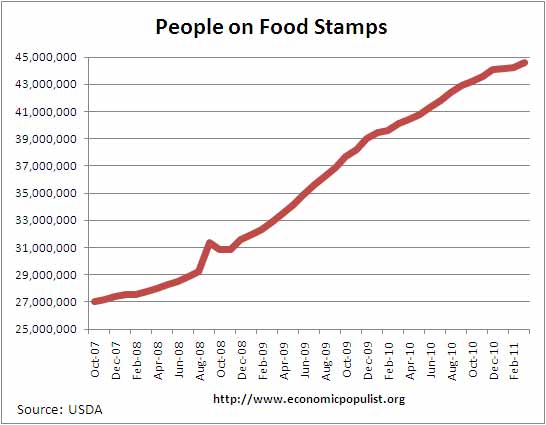 Idaho had a 38.8% yearly increase in food stamp use for the year. No state had a decrease.

The Wall Street Journal broke down the percentages of State populations on food stamps. By the way, the government calls this the Supplemental Nutritional Assistance Program, or SNAP, which of course is nice and nondescript.

People are so desperate kids are coming in for school lunch, while school is out:

Even during the summer children returned to schools to take advantage of free lunch programs where they were available. Nearly 195 million lunches were dished out in August and 58.9% of them were free. Another 8.4% were available at reduced prices. That number will surge when the fall data are released because children will be back in school. Last September, for example, more than 590 million lunches were served, nearly 64% of which were free or reduced price.

With millions losing their unemployment insurance this summer, the number of people on food stamps is certain to go higher.

The statistics are sad for the "richest country in the world." In September the number of people on food stamps surged past 35 million. But this study released by the Archives of Pediatrics & Adolescent Medicine shows that nearly half of all US children, including an overwhelming majority (over 90%) of black children, will eat meals at some point during their childhood paid for by food stamps, an indicator of poverty, a study showed Monday. This study was based on analysis of a 32-year study of some 4,800 US households.

And it shows that our children start off life at an severe disadvantage compared to children in other industrialized countries. If you don't believe that consider the conclusion of the study:

Now this is my favorite economic indicator. How many people in the United States are so broke they qualify for food stamps? Well, in a matter of one month, we have an increase to "surge past" 35 million.

Food Stamp recipients are at an all time record, 34 million. For reference the population of the United States is about 307 million.

Enrollment surged by 2 percent to reach a record 34.4 million people, or one in nine Americans, in the latest month for which figures are available.

It was the sixth month in a row that enrollment set a record. Every state recorded a gain, and Florida had the largest increase at 4.2 percent.

1 in 9 means about 11.1% of the entire U.S. population is qualifying for food stamps and getting a measly $134/month average.

Here are the rules to qualify. Remember you have to be at or around the poverty level to get food stamps.

AP just caught how low the income levels are to received any government help by noting a $25 Stimulus check may cost you food stamps.

When President Barack Obama increased unemployment benefits as part of his economic stimulus, he also made some Americans ineligible for hundreds of dollars a month in food stamps. Under the economic recovery plan, laid-off workers have seen a $25 weekly bump in their unemployment checks as part of a broad expansion of benefits for the poor. But the law did not raise the income cap for food stamp eligibility, so the extra money has pushed some people over the limit.

The article comments this is what happens when bills are ramrodded through Congress and not even read, never mind analyzed.   No kidding.    It's ridiculous.

Well, America has yet another thing to be proud of, a record number of Americans are on food stamps.

Food stamps, the main U.S. antihunger program which helps the needy buy food, set a record in September as more than 31.5 million Americans used the program -- up 17 percent from a year ago.