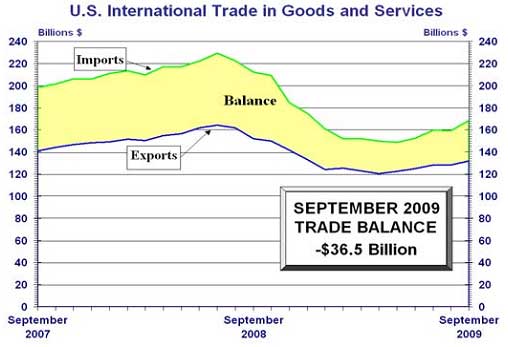 The deficit, which detracts from GDP, increased 5.7 billion in one month, or 18.2%. That's the largest jump in a decade.

The balance of services remained stable, both imports and exports grew by $0.2 billion. 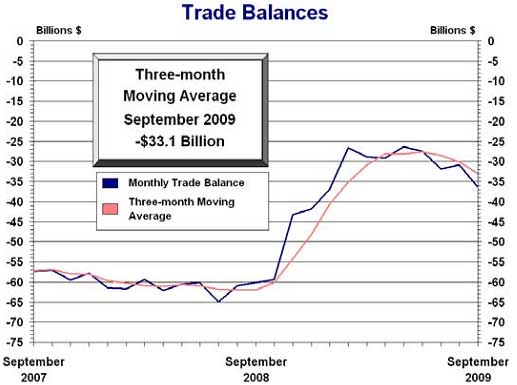 The August 2009 international trade in goods and services report was released today. Anything that reduces the U.S. trade deficit to me is good news.

In past global slowdowns, the United States invariably led the way out, followed by Europe and the rest of the world. But for the first time, the catalyst is coming from China and the rest of Asia, where resurgent economies are helping the still-shaky West recover from the deepest recession since World War II.

Anyone recall China's Quest for Oil quoting deal after loan after acquisition?

January's trade statistics are out and imports dropped 22.8% while exports dropped 16.4%. So, a ring of good news, our trade deficit dropped. But the bad news: U.S. exports have dropped 44% on a yearly scale. From the BEA:

The region’s trade deficit of 32.1 billion euros ($40.5 billion) compared with a surplus of 15.8 billion euros in 2007, the European Union’s statistics office in Luxembourg said today.

The spreading of the global recession is curbing demand for European products, adding to pressure on the economy, which shrank the most in 15 years in the fourth quarter. Volkswagen AG, Europe’s largest carmaker, said deliveries fell about 20 percent last month and that sales in the export markets of Brazil, Russia, India and China have been “particularly hit” by the credit freeze.

Associated Press has a nice short fact sheet on the trade deficit, while most others point to it dropping.

the trade deficit in September was $56.5 billion, down from $59.1 billion in August

Well, finally someone admits something we all know, we're in a recession:

We're in a recession,'' Allen Sinai, chief economist at Decision Economics Inc. in New York, said in a Bloomberg Television interview. ``It's going to widen, it's going to deepen.

six months, the economy lost 438,000 jobs. Manufacturing and construction shed 235,000 and 261,000 jobs, respectively, and in recent months, layoffs spread to finance and retail sales. If the economy is to pick up in the second half, the Friday jobs report will have to confound forecasters, who are generally pessimistic

Until tonight's show I didn't know what a "Sovern Wealth Fund" was. See this link for more info: