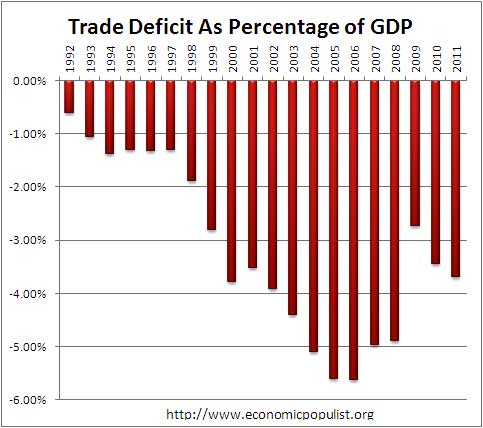 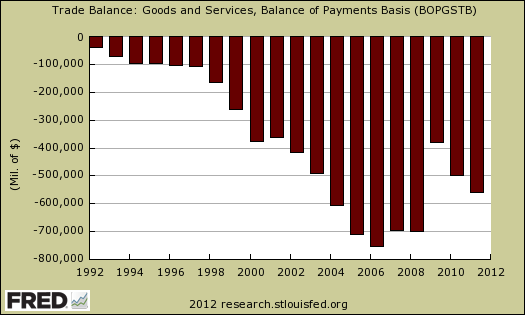 On an annual basis, using Census accounting methods, the goods only trade deficit was -$726.291 billion. This means China, including oil, was 40.7% of the goods trade deficit. 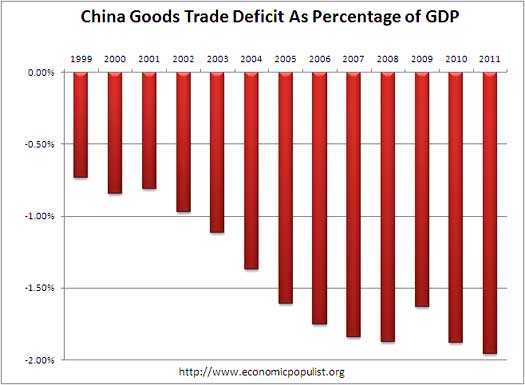 The above graph shows the U.S.-China goods trade deficit as a percentage of U.S. GDP. 2% might sound small, but one must realize over 70% of U.S. GDP is personal consumption. When one is looking at trade deficits by GDP, they represent lost jobs, production, finished goods and less income.  All of these production types of economic activity are multipliers. They multiply other economic domestic activity, such as other jobs, housing, investment and more consumer spending.  In other words, 2% for one country to dominate U.S. GDP is way too much. So is 3.7% of the overall trade deficit.

Why do increasing trade deficits stunt economic growth?  This is actually a basic accounting problem from national accounts, or balance of payments. Basically the trade deficit equals savings minus investments plus government revenues minus spending. Or in accounting speak:

If the left hand side of the equation is negative and increasing, something on the right hand side of the equation has to give. So, either we run large government budget deficits, or we private people borrow our brains out and don't save a penny. In other words if the budget is balanced then with high trade deficits, private savings must be less than private investment, a lot less. We're lookin' at over half a trillion dollar annual trade deficit here. Yes Virginia, large trade deficits have a negative multiplier effect on overall economic growth.

Renewable energy is the key to our future buy allowing us to burn less coal and gas and exporting it instead of burning it thereby earning tax income so they can charge less overall taxes which is the purpose it serves best.

First, by far, if one looks at the data, the largest energy import is oil. Second, coal and gas add to global warming. Third, we have plenty of gas and coal but politics won't let things to moved to gas from gasoline. Forth, China went and dumped, is giving massive government subsidies, undercutting any start-up U.S. industry in alternative energy.

The key is to reduce oil imports and another key is to subsidize more heavily, plus put import restrictions on alternative energy so a U.S. industry can start and grow.

Additionally, the U.S. electrical grid is extremely inefficient, it wastes much more power than it delivers. We need a new distribution system, as well as more of a "localized energy generation" system to take advantage of local resources as they occur (i.e. methane on farms, wind power on coasts, wave power on coasts and so on).

Literally we have "solar panel" manufacturers offshoring their actual manufacturing to China. There are so many vested interests when it comes to energy, not an objective, smart design or fact shall be had.

The key is driving down the price of electricity in this country. We do this by an "all of the above" strategy, which, despite the rhetoric, is antithetical to the aims of this current, pathetic administration.