The S&P Case Shiller home price index shows a -3.8% decline from a year ago over 20 metropolitan housing markets and a -3.9% decline for the top 10 housing markets from January 2011. Home prices are back to January 2003 levels and both composite indices hit, yet again, new lows. Both composites are now down -34.4% from their 2006 home price bubble peaks. Below is the yearly percent change in the composite-10 and composite-20 Case-Shiller Indices. These are not seasonally adjusted, but comparing from January 2011.

Atlanta is simply on fire and not in a good way. From S&P, using not seasonally adjusted data:

Atlanta continues to stand out in terms of recent relative weakness. It was down 2.1% over the month, and has fallen by a cumulative 19.7% over the last six months. It also posted the worst annual return, down 14.8%.

Atlanta's housing bubble peaked about a year later than other cities, yet still Atlanta seems well on their way to become the next Las Vegas for residential real estate. Altanta foreclosures are currently 1 for every 244 housing units and Georgia is currently ranked 4th in foreclosures nationally.

Below are the seasonally adjusted indices for this month. Charlotte, North Caroline did not report their data in time. The below graphs use Charlotte's December values. 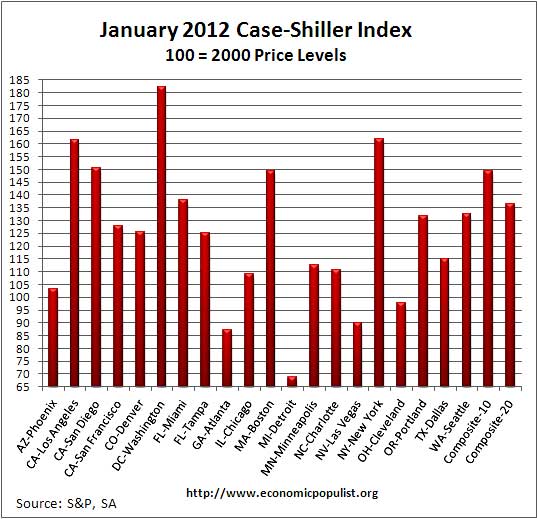 Below are all of the composite-20 index cities yearly price percentage change, using the seasonally adjusted data. 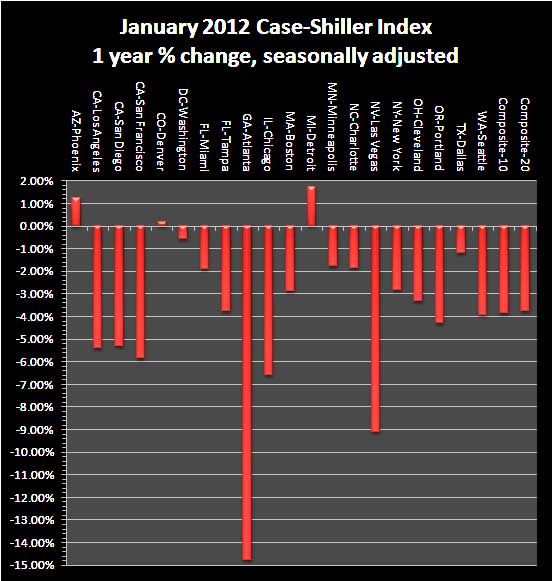 In January 2012, Denver, Detroit and Phoenix were the only MSAs to post positive annual returns. Month-over-month, Miami, Phoenix and Washington DC were the only cities that recorded positive gains -- up 0.6%, 0.9% and 0.7% in January 2012, respectively. Both the 10 -City and 20 -City Composites were down 0.8% from their December 2011 levels. Eights MSAs (Atlanta, Chicago, Cleveland, Las Vegas, New York, Portland, Seattle and Tampa) and both Composites posted new index lows in January 2012. Atlanta, Cleveland, Detroit and Las Vegas continue to have average home prices below their January 2000 levels.

For more analysis, we recommend Calculated Risk, who does correct, extreme analysis and graphing on Case-Shiller data.