If anyone believes offshore outsourcing jobs is passé and not impacting U.S. labor markets think again.  The Economic Policy Institute has published a new study showing America has lost millions of jobs to China's cheap labor market.  From 2001 to 2013, the massive trade deficit with China has cost the United States 3.2 million jobs.

Worse, the researchers discovered 75.7% of those jobs lost, 2.4 million, were in manufacturing  China and China alone accounts for two-thirds of all manufacturing jobs lost between 2001 and 2013. 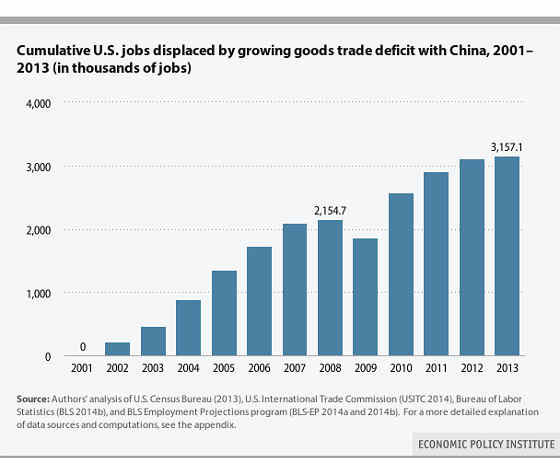 Of the jobs lost, computers and electronics have been hit the hardest.  Computers & electronics parts has lost 39.6% of the total jobs offshore outsourced, that's 1,249,100 jobs.  Anyone remember when high tech was the future for America?  It is no surprise that China just became the world's most powerful economy.  Corrupt politicians with their multinational corporate backers have literally offshore outsourced America's economic future.  From the report:

Global trade in advanced technology products—often discussed as a source of comparative advantage for the United States—is instead dominated by China. This broad category of high-end technology products includes the more advanced elements of the computer and electronic parts industry as well as other sectors such as biotechnology, life sciences, aerospace, and nuclear technology.

Every state in the Union has been affected and in the top 10 states, these lost jobs represent 2.44% to 3.67% of total employment, that's a lot.  Below is EPI's interactive map of the United States showing how many jobs have been lost per state.

It's not just jobs, wages also have been impacted.  The study notes those without four year college diplomas, about 100 million workers, have been impacted to the tune of $180 billion dollars. If this were not all bad enough, China is rapidly upping their game and moving into advanced manufacturing.  That is where the research and development tech jobs are.  The implication here is college level jobs will be increasingly labor arbitraged directly.  China isn't just willing to be the cheap labor source of the globe and instead wants to be the premier R&D center.  As manufacturing goes, research and development is sure to follow.  These advanced manufacturing areas are already the domain of China instead of the United States.  From the report:

The composition of imports from China is changing in fundamental ways, with significant, negative implications for certain kinds of high-skill, high-wage jobs once thought to be the hallmark of the U.S. economy. China is moving rapidly “upscale,” from low-tech, low-skilled, labor-intensive industries such as apparel, footwear, and basic electronics to more capital- and skills-intensive industries such as computers, electrical machinery, and motor vehicle parts. It has also developed a rapidly growing trade surplus in high-technology products.

Below is the annual China goods trade deficit.  In 2013 the total deficit was $318 billion.  Notice how dramatically the deficit increased and that is all due to granting permanent normal trade relations (PNTR), with China in 2000. The Alliance for American Manufacturing has a take action page to demand Congress do something.  The problem is our government representatives are so corrupt, they won't.  After all it was they who enabled the offshore outsourcing of American jobs in the first place.  The report even breaks down the damage by Congressional district, yet many of these same districts are gerrymandered and no amount of job loss and other Congressional buffoonery will cause these people to lose their seats.  Below is the report's map of Congressional districts with their job losses from the trade deficit with China.  Notice Silicon valley and how those Congressional representatives have never even faced a serious race challenge, never mind a consequence for representing the corporations in those districts instead of the workers there.

...and these jobs are usually union and better-paying jobs. They also have a greater "multiple effect" (especially in the tech industry).

China is not a good partner for one big reason, China protects North Korea, NK is one bad country, you can be killed there for being a Christian, they are very cruel to anyone who doesn't worship the Leader of the Country, and China helps them, you know in the old days of the USA we had strong principles, we didn't help Tyrants or those who did, we should reevaluate our relations with China.