The December 2014 Retail Sales report shows retail sales declined -0.9% for the month.  As gasoline prices plunged, sales as gas stations dropped a whopping -6.5%.  Holiday sales on the other hand, were up 4.0%.  Retail sales have now increased 3.2% from a year ago.  December retail sales was not just about gas prices as most categories had monthly declines.  Without autos & parts sales, for example, retail sales dropped -1.0%.   Retail sales are reported by dollars, not by volume with price changes removed. Total retail sales are $442.9 billion for December.  Below are the retail sales categories monthly percentage changes.  These numbers are seasonally adjusted.  General Merchandise includes super centers, Costco and so on. 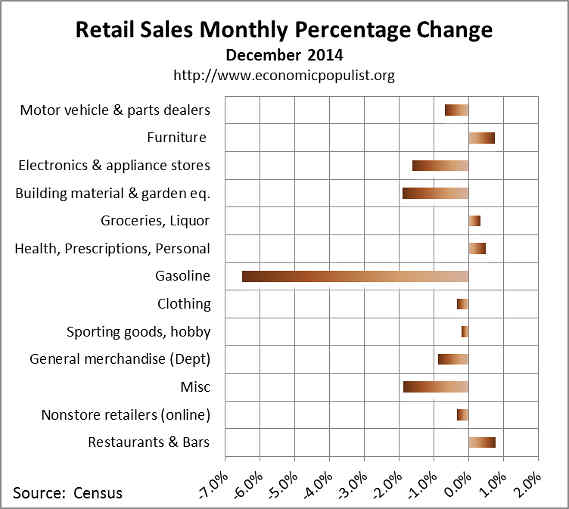 Below is a graph of just auto sales.  Auto sales and parts dropped -0.8% for the month and for autos alone, declined -0.3%.  For the year, motor vehicle sales have increased 9.8%.  Autos & parts together have increased 8.6% Below are the retail sales categories by dollar amounts.   As we can see, autos are by far the largest amount of retail sales.  We also see online retailers continue to expand. 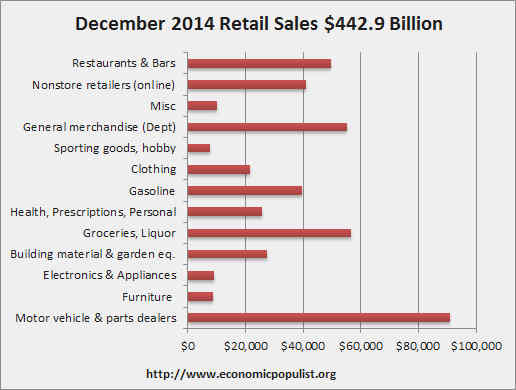 Graphed below are weekly regular gasoline prices, so one can see what happened to gas prices in November.  Gasoline station sales are down -14.2% from a year ago. The below pie chart breaks down the monthly seasonally adjusted retail sales by category as a percentage of total November sales by dollar amounts.  One can see how dependent monthly retail sales are on auto sales by this pie chart.  We also see non-traditional retailers making strong grounds on traditional general merchandise stores and almost equal to gasoline sales in terms of importance. 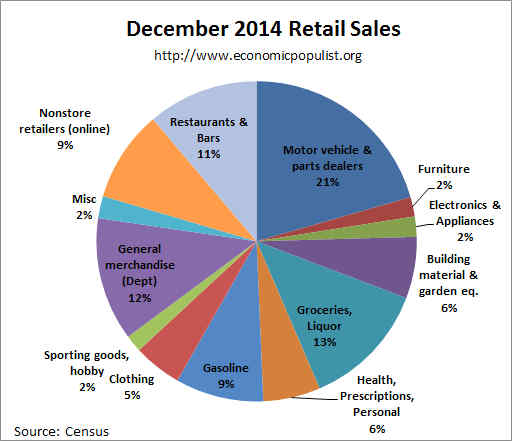 Retail sales correlates to personal consumption, which in turn is about 70% of GDP growth.  Yet GDP has inflation removed from it's numbers.  This is why Wall Street jumps on these retail sales figures.  Below is the graph of retail sales in real dollars, or adjusted for inflation, so one gets a sense of volume versus price increases.  Below is the annualized monthly percentage change in real retail sales, monthly, up to October 2014.  This is a crude estimate since CPI is used instead of individual category inflation indexes.  The below graph can give some insight as to what consumer spending might shape up to be for Q4 2014. For the three month moving average, from October to December in comparison to the July through September average, retail sales have only increased by 0.4%.  Gasoline looks like the culprit still as the bottom has fallen out of prices and .  The retail sales three month moving average in comparison to a year ago is up 4.1%.  Overall as shown the below graph of quarterly annualized retail sales percentage change, up to Q3 2014.  We believe gas prices have much to do with things. Seasonal adjustments are aggregate and based on events like holidays associated with shopping, i.e. the Christmas rush.  Advance reports almost always are revised the next month as more raw sales data is collected by the Census.  In other words, do not get married to these figures, they will surely be revised.

One New York Times article (Re: The Fed’s Beige Book Survey) says that: "Reports of rising wage pressures were less prevalent in the latest survey than in its previous report, although there was continued upward pressure for high-skilled labor in such areas as high-tech."

That same article also says, "Many private economists believe the big drop in oil prices will provide a boost to the overall economy by giving consumers more money to spend on other products."

But a different New York Times article says: "Americans Pocketing What They Save on Gas, Retail Data Suggests"

here is a copy of the table from the advance report for November, as reported by Census last month; here's the table from this month, showing the November sales change by business type as revised this week....