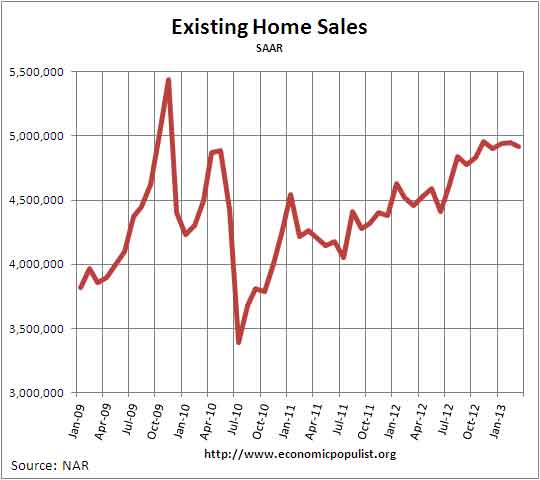 Inventory of existing homes increased 2.2% for the month, a 4.7 months supply and inventory is down -24.2% from a year ago.  Inventories by months to sell at current sales volume is now at 2005 levels.  Short supply also partially explains the increasing prices.  NAR blames inventories yet last month inventories were lower.  NAR claims buyer traffic has increased 25% from a year ago.

The national median existing home sales price, all types, is up, now at $184,300, a 11.8% increase from a year ago.  This is the highest annual increase since November 2005.  Even more eerie, the last time there were 13 consecutive months of median existing home price increases was also the height of the housing bubble, May 2005 through May 2006.   The average home price for March was $233,200, a 9.9% annual increase.  We have bubble like price increases that may very well have much to do with the Federal Reserve mortgage backed securities purchases, known as quantitative easing.  The Fed's move is keeping mortgage interest rates at record lows.  Yet NAR never mentions homes becoming unaffordable as a reason this month's sales declined.

According to RealtyTrac, foreclosures are down to Q2 2007 levels, but foreclosure starts increased 2% for the month.

Foreclosure filings — default notices, scheduled auctions and bank repossessions — were reported on 152,500 U.S. properties in March, a decrease of 1 percent from the previous month and down 23 percent from March 2012.

According to NAR, 37% of existing homes were on the market less than a month before being sold.

The median time on market for all homes was 62 days in March, down from 74 days in February and is 32 percent below 91 days in March 2012. Short sales were on the market for a median of 81 days, while foreclosures typically sold in 46 days and non-distressed homes took 66 days.

Here is our overview of last month's existing home sales not revised.  NAR does not mention their revisions in their press releases.