The bitter cold blew in more than snow for January.  Existing home sales suffered as well with a -4.9% decline in sales for the month.  This is the biggest monthly drop off in nine months with single family homes declining by -5.1% in sales.  Sales by volume are now 4.82 million in January.  April 2014 showed 4.75 million annualized sales.   NAR blames the never ending increasing prices of homes as the culprit for declining sales.  Prices are once again back to unaffordable territory. 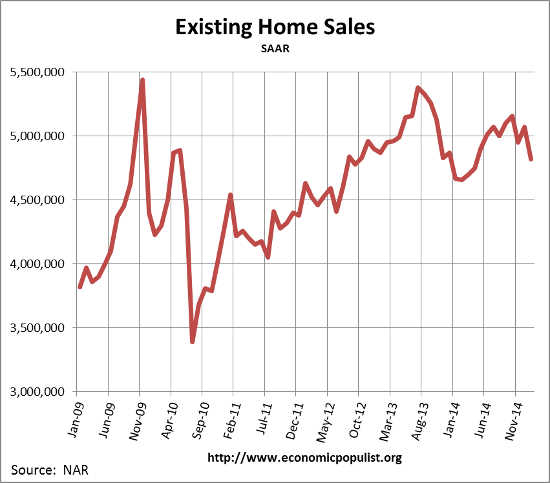 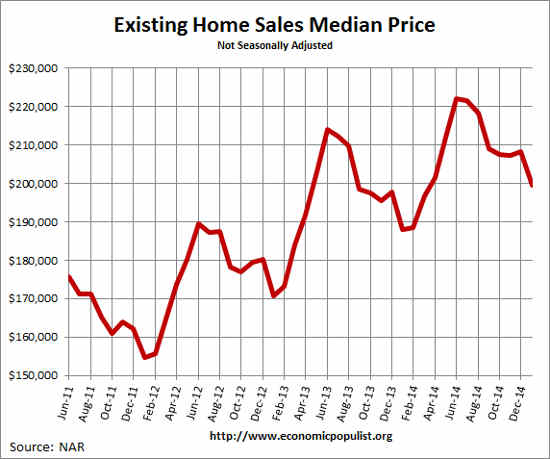 The median time for a home to be on the market was 68 days.  Short sales by themselves took 128 days.  Housing inventory from a year ago has decreased -0.5% but unsold inventory is up 0.5% from the previous month.  Current the 1.88 million homes available for sale are a 4.7 months supply.

On a separate note, RealtyTrac reported January foreclosures increased by 5% for the month and are down 4% for the year.  RealtyTrac reports 933,043 properties are in the foreclosure process or already bank owned.  It's fairly obvious the great bargain hunt from the housing bubble collapse is over as cheap properties have simply dried up.  Now the issue is the very tight lending standards so new home buyers cannot get into a home, plus the over inflated prices.  This quote from the NAR stood out and lord help you if you are self-employed trying to get a mortgage:

The Federal Housing Administration’s overly restrictive approval process limits buyers’ access to condos...NAR has urged the FHA to develop policies that will give buyers access to more flexible and affordable financing opportunities and a wider choice of approved condo developments.

Below is NAR's breakdown by existing home sales type and regions.  The west has the most unaffordable housing consistently.

Here are our past overviews of existing home sales not revised.