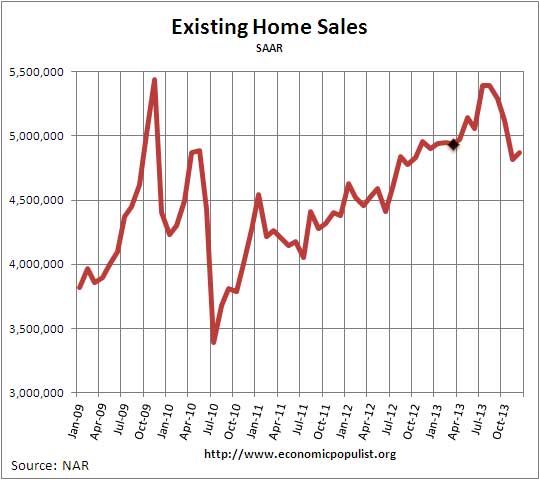 The above graph shows why existing home sales are showing declines from a year ago yet hit levels for 2013 not seen since 2006.  That large bubble area for 2013 is averaged against the entire previous year, whereas we see a strong downward slide in volume and why the decline in sales in comparing December 2013 to December 2012 levels.  This is why the annual total comparisons are deceptive for recently existing home sales have been flat or declining. 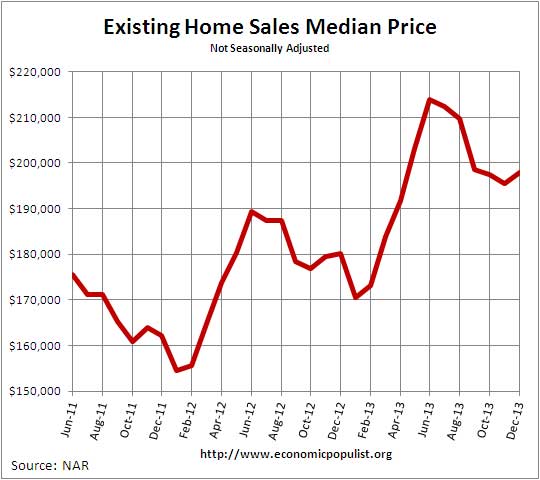 The median time for a home to be on the market was 72 days.  December's time on the market should probably be ignored for the polar vortex shut down and delayed closings.  Housing inventory remains very tight and fell 9.3% in December, yet from a year ago unsold inventory has increased 1.6%.  Current 1.86 million homes available is a 4.6 months supply.

According to NAR existing home sales are up almost 20% since 2011.  On a separate note, RealtyTrac showed 2013 foreclosures were up from 2012.  Foreclosure and short sales were 16.2% of all residential home sales in 2013.  2012 foreclosure and short sales were 14.5% of all sales.  Third party buyers at foreclosure auctions was 1.2% in 2013 while in 2013 3rd parties made up 0.8% of auction sales.  This is while properties just being started in the foreclosure process is at a seven year low.  RealtyTrac reports over 1.2 million properties are in the foreclosure process or already bank owned.

Below is NAR's breakdown by existing home sales type and regions.  Notice the large decline in Condo sales:

Existing-home sales in the West rose 4.8 percent to a pace of 1.09 million in December, but are 10.7 percent below a year ago. Inventory is tightest in the West, which is holding down sales in many markets, and multiple bidding is causing it to experience the strongest price gains in the U.S. The median price in the West was $285,000, up 16.0 percent from December 2012.

Here are our overviews of existing home sales not revised.

NBC: "Insatiable demand from hedge funds, private equity investors and foreign buyers, all armed with ready cash, are elbowing first-time buyers out of the housing market."

We did a piece of hedge funds as landlords, it's not pretty and because they are incorporated, almost no recourse for renters as they completely shirk rental law,renter's rights, which are beyond weak in most states.

i think the northeast, where i live, has a higher foreclosure rate than the rest of the country due to the laws in these "liberal" states.

we know how people obtained homes during the housing bubble, by signing up for loans they could not possibly afford. Look at cash investors then insane places like SF, LA, D.C., etc. drive up national median price way up.