The BEA has released revisions for Gross Domestic Product by Industry for years 1997 all the way to 2012.  Unfortunately but not surprising, manufacturing was revised downward in their real value added to economic growth.  Overall GDP grew 2.8% in 2012 and that year's better news is private goods GDP increased more in growth in comparison to private sector services. 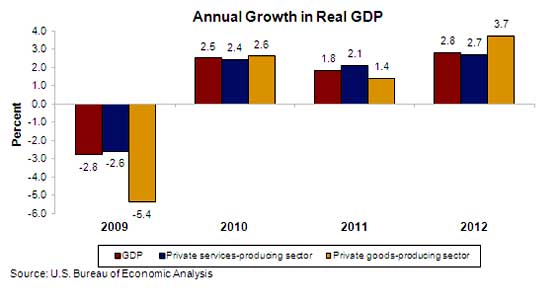 The below pie chart shows the percentage of GDP each industrial sector is by real, or adjusted for prices, value of the sector.  This tells us what business sectors and industries really run the economy and it is not Wall Street per say.  We see manufacturing as a whole is 12.5% of overall GDP by value added.  Value added means gross output minus intermediate inputs.  This is sales, receipts, other operating income, commodity taxes, changes in a firm's inventories minus their raw materials, semifinished goods used and services purchased.

Finance, insurance, real estate, rental, and leasing is an astounding 19.5% of GDP which is unchanged from before the recession.  Real estate and rental and leasing by itself actually grew, whereas finance and insurance shrank their percentage of the GDP pie.  Considering this sector was the cause of economic implosion, this is probably not a good thing to have it being almost 20% of the overall economy.  Professional and business services overall is less, 11.5% of overall GDP.  The industry includes managerial positions, research, technical professions, administration and even waste management. 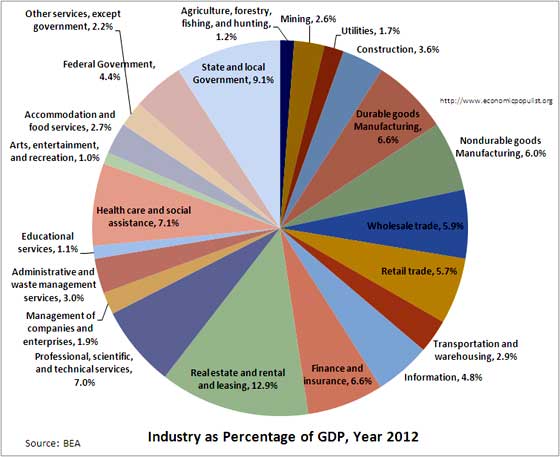 Now take a look at the below 2002-2007 average GDP pie chart each industrial sector adds.  Some of the changes in GDP share per industry are structural.  For example, technology was still separate from many people's daily lives in 2007 whereas today, it is interwoven.  It is no surprise that this area shows growth.  Yet,manufacturing was 15.0% of GDP averaged between 2002 and 2007 and now only 12.5%.  This is in spite of manufacturing reaching it's 2007 levels.  What this shows is manufacturing's long decline, starting in earnest about year 2000.  It is clear manufacturing has been offshore outsourced and by doing so is simply hollowing out the U.S. economy.  Manufacturing spawns a host of other industries, including advanced R&D, so all should be very concerned at manufacturing's declining GDP share.  On the other hand, we expected the construction industry to be less of the overall economy, since the earlier decade construction boom was fueled by the housing bubble. 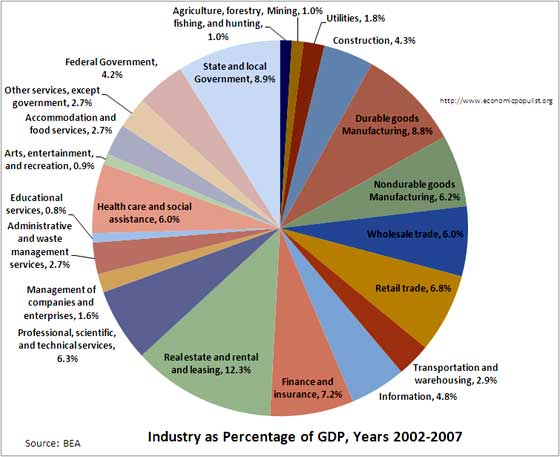 In terms of individual industry growth from 2011 to 2012, mining is simply on fire with a 14% increase.  Gas extraction, otherwise known as fracking, is one of the main reasons for the growth.  Management of companies also has shown strong growth, which is a sad state of external sourcing of what used to be handled internally inside businesses.  Information increased 4.4% for 2012, it's largest increase since 2008.  Construction shows it's first increase since 2004.  Nondurable goods manufacturing has it's second annual contraction and the only contraction of all private industries for 2012.  The other thing is notice is how the budget cuts and sequester has negatively impacted economic growth as the federal government value added shrank -1.0% from 2011. 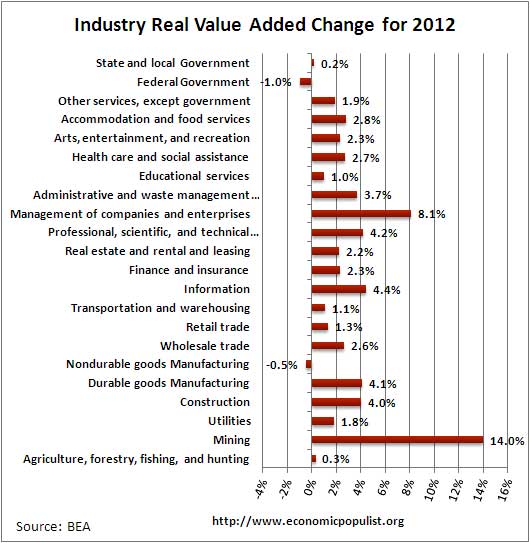 The BEA also has a special index consisting of computer and electronic product manufacturing, yet excluding navigational, measuring, electro-medical, and control instruments manufacturing.  Also included in this special index are software publishers; broadcasting and telecommunications; data processing, hosting and related services; internet publishing and broadcasting and web search portals; and computer systems design and related services.  This is fairly odd they would exclude so many navigational and measurement tools since the advent of GPS has advanced these technology areas.  Overall this special index increased 7.2% from 2011, which is no surprise since structurally the economy is much more interwoven with technology as innovation in these sectors has changed the way the world works and communicates.