The BLS employment report is another good showing for payroll jobs as growth was 257,000.  January is the month of revisions and November 2014 is now a 423,000 jobs added blowout with December 2014 not far behind with 329,000 jobs added.  We're on year eight after the start of the great recession and 2014 is finally when America started seeing some jobs growth.  While jobs are consistently being added each month, but only recently has the types of jobs created expanded beyond the lowest paying ones. The start of the great recession was declared by the NBER to be December 2007.  The United States is now up 2.5 million jobs from December 2007.  That sounds great until one realizes working age population has increased and thus America needs jobs for all the new potential workers. Below is a bar chart showing the employer's payroll growth since January 2008.  This shows major sectors like manufacturing and construction have not recovered from the recession.  Leisure and hospitality is notorious to have very low paying jobs.  Health care jobs are not just nurses and doctors, but very low paying aids and assistants, as well as caregivers.  Professional and business jobs category contains waste management jobs and the temporary ones. 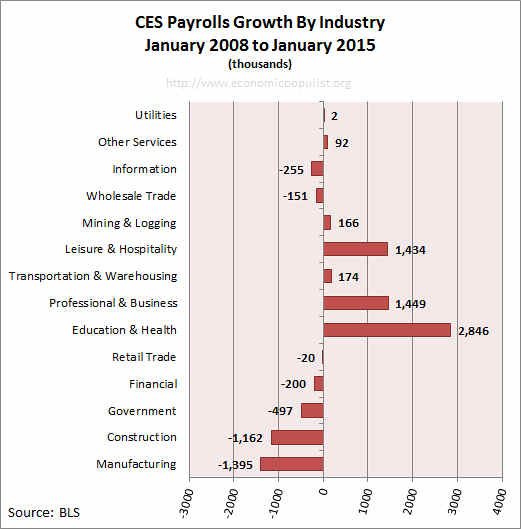 Job gains from January 2014 are 3.207 million and the breakdown is shown below.  This is just great jobs growth and one can say wow and finally.  It is great to finally see jobs growth in manufacturing and construction.  Yet, watch out on professional and business categories.  There are many low paying office worker and support services jobs in this category.  Additionally the BLS counts foreign guest workers in their employment statistics, so in the Science & Technology fields, don't assume those jobs went to Americans. 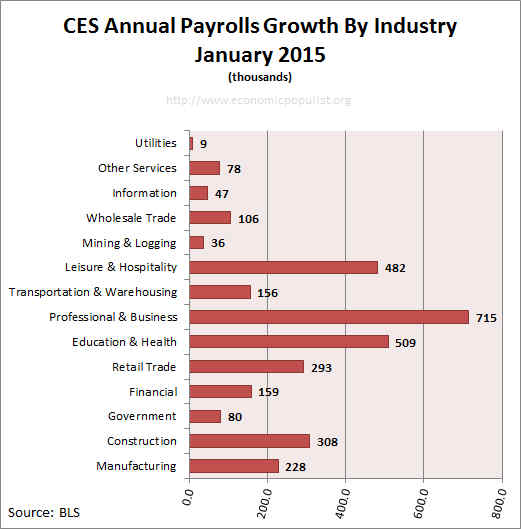 Just to keep up with population growth, we need at least 100,000 jobs per month or 1.2 million a year and this estimate assumes the current artificially low labor participation rates.  While it will take ages to create enough jobs to re-employ all of those who dropped out of the count during the recession who really need a job, the fact is payrolls are finally showing the kind of growth needed to do just that. Below is a bar chart of the payroll gains by industry sector for the month.  Within the education and health care jobs, 13.4 thousand were in Doctors' offices with 38.4 thousand being health care jobs in total.  In leisure and hospitality jobs, 34.6 thousand of those jobs are in restaurants and bars, the lowest paying jobs of them all.  Within Professional and Business jobs, 8,000 of the gains were in computer related work while 9.4 thousand were in administrative and support services.  Retail trade are primarily low paying jobs such as working at grocery stores and gas stations. 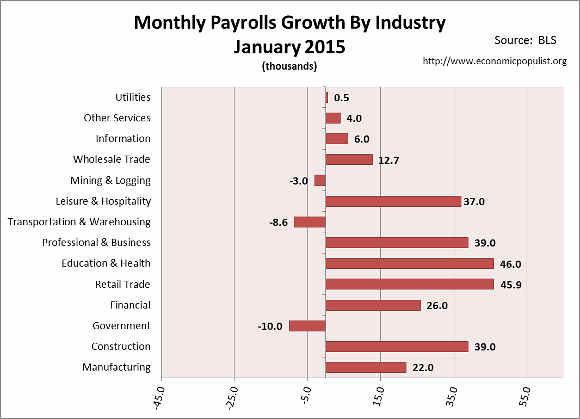 This month manufacturing added 22,000 jobs with 18 thousand of those jobs being in durable goods, a fine showing especially considering the drop in oil and thus production will slow. Below is a graph of auto & parts manufacturing, which this month gained 6,700 jobs. Retail trade are the retail sales outlets like big box marts, direct mailing and anything retailing merchandise.  Retail trade added 45.9 thousand jobs with 7.7 thousand of those jobs being in auto and parts stores and auto dealers. Education and health services gained 46 thousand jobs for the month and over and over again we see gains in health care.  Adding health care jobs isn't exactly the type of industry America needs to get moving again but this growth is also a reflection of the increasing population in America. Corporate lobbyists scream there is a worker shortage in skilled labor, which is clearly false when one looks at the lack of job gains and flat wages.  Yet temporary help services is also part of professional and business services sector.  Below shows the gains of temporary jobs, but this month temporary jobs declined by -4,100. The information sector gained six thousand jobs.  This includes newspapers and film production so no surprise with so many technological disruptors this sector is really shrinking as a general rule. Transportation and warehousing are jobs as one would expect from the sector title, airline workers, truckers, working in warehousing and employment associated with trade, such as port dock workers.  This month the sector lost -8,600 jobs.  Couriers and messengers are included in this figure and this month they just plunged by -14,100. We broke down the CES by industry to see what kind of percentage changes we have on the share of total number of payroll jobs from 2008 until now.  Below is the percentage breakdown of jobs by industry for January 2008. 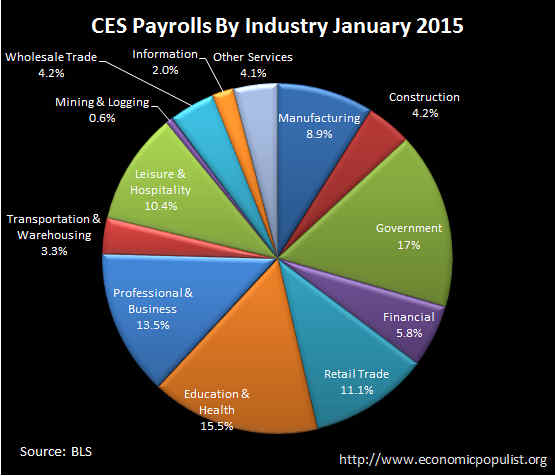 Below is the breakdown of jobs growth per industry sector for January 2015.   From these two pie charts we can see the job market has changed into more low paying service jobs of health care assistance and restaurant workers.  Cconstruction jobs shrink relative to total payrolls by 0.9 percentage points.   Manufacturing, of which the auto industry is a part, has contracted 1.1 percentage points as share of total jobs.  The shrinkage in the manufacturing sector should really stand out as bad news, yet the recent growth in manufacturing jobs is a solid sign of life for the U.S. economy. 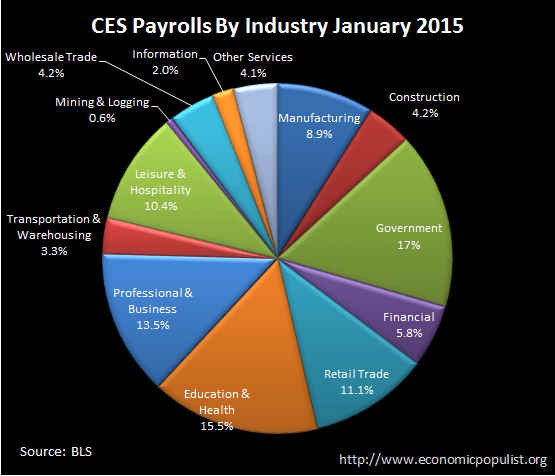 Some in the press really blast payrolls and mention the low paying jobs being created.  This is true yet in comparison to a year ago things have finally consistently improved.  Yet manufacturing in particular, we believe is more a victim of bad policies, such as trade than the lingering after effects on the recession and America needs those type of higher wage jobs to restore the U.S. middle class.

Reshoring – getting companies to understand all of the benefits of local production and adopt a more comprehensive total cost analysis could cut the trade deficit by 25% and bring back 1 million manufacturing jobs. Mainly this requires education of companies.

To get the other 75%, requires improved competitiveness: taxes, currency/tariffs, skilled workforce and basic education.

The most important accomplishment has been the net-loss of 100,000+ manufacturing jobs each year has ended. The economic bleeding has stopped.

New reshoring is now balancing new offshoring at about 40,000 manufacturing jobs/year, resulting in the first neutral year of job loss/gain in the last 20.

The Reshoring Initiative Can Help.

The not-for-profit Reshoring Initiative’s free Total Cost of Ownership software helps corporations calculate the real P&L impact of reshoring or offshoring. In many cases, companies find that, although the production cost is lower offshore, the total cost is higher, making it a good economic decision to reshore manufacturing back to the U.S. http://www.reshorenow.org/TCO_Estimator.cfm