A shocking claim was made by various press sources that those at the bottom of the American economic pile have living expenses which are double their income.

The shocking statistics are derived from the BLS Consumer Expenditure Survey, a quarterly and annual survey of people's income and spending habits. The first thing to notice is the average income of the lowest income quintile in America isn't enough to rent a cardboard box to live in for many areas of the country. Yet, how can it possibly be that these households have expenses over double the money they have coming in? If we look over the history of the bottom 20% of households by income, average annual expenditures have always exceeded income as shown in the below historical chart. 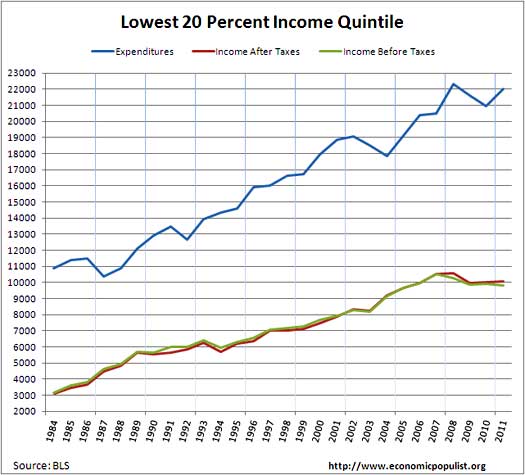 Many in the press dismiss these figures by claiming many of these people are retirees, living off of their retirement savings. Is that true? Not as a whole actually. Those aged 65 and over of the lowest 20% of income was on average 0.4 of the 1.7 average consumer unit. In other words, 23.5% were 65 or over.

Another claim is that many of the lowest income quintile are living off of credit cards, family and friends and payday loans.

Many of these households may be spending more than they earn through some combination of loans from family and friends, credit cards, savings, and payday loans.

That doesn't seem quite right either. The survey reports a net decline in liabilities during the recession with a recent increase in debts for the poorest by income Americans. 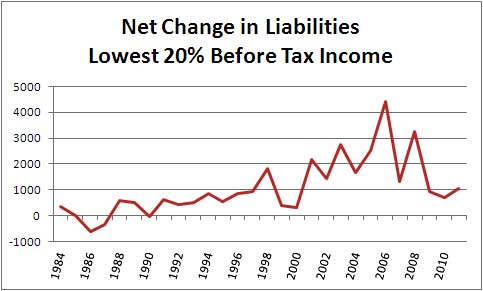 If we look at the Federal Reserve flow of funds, which doesn't break down debt by quintiles, we see lower household debt in 2011. At the same time the Pew Research Center reports record student debt and it's hitting the lowest income households the worse. The lowest income quintile has 13% of this group owing student debt. Of that 13%, student debt represents 24% of their annual income in 2010.

Believe this or not, the BLS sources of income include food stamps, social services, welfare, social security, unemployment compensation and so on. Yes folks, food stamps are considered income. Additionally the above graph shows the earned income tax credit does give a a minor supplement as a refund, from $128 in 2010 to $269 in 2011. We can see the before and after tax income is pretty much the same for the lowest income earners in the U.S.

The below graph shows some select sources of money for the bottom income quintile. What the graph also shows is how little public assistance and unemployment insurance have kept up in comparison to social security to help those with low income. 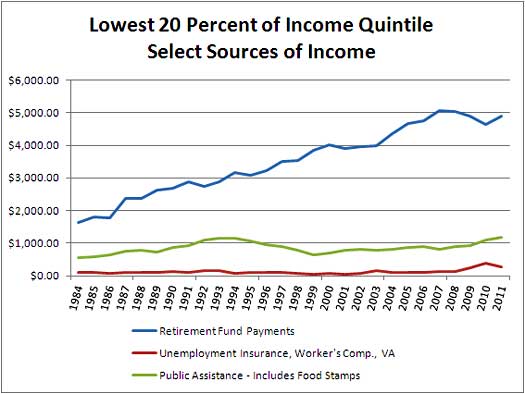 So how can people be spending more than they are receiving in income? According to the BLS:

There are reasons why expenditures exceed income for the lower income groups despite the use of imputed income data. Consumer units whose members experience a spell of unemployment may draw on their savings to maintain their expenditures. Self-employed consumers may experience business losses that result in low or even negative incomes, but are able to maintain their expenditures by borrowing or relying on savings. Students may get by on loans while they are in school, and retirees may rely on savings and investments.

The headline buzz of the lowest 20% of households in the U.S. having expenses more than twice their income is a tad misleading, even while true. There has always been a large gap between income and expenses for the bottom 5th in income households. In spite of the survey attempting to obtain more accurate income information in 2003 onward, the reality is the gap between trying to survive and income has become wider. Below is the difference between income and expenses. We see a widening gap for 2011, in fact the change in more living expenses to income was 9.2% from 2010. 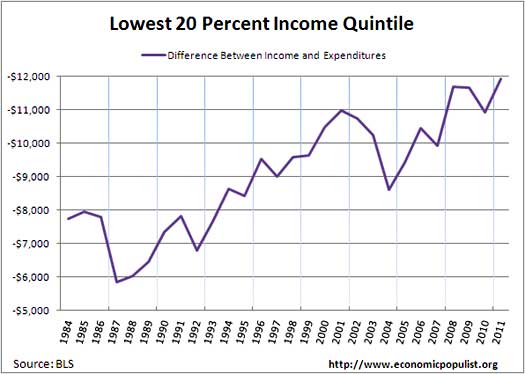 The worse year for the widening gap between income and expenses was 1996, a whopping 13.2%. Welfare reform was signed into law August 1996.

Clearly people are getting money from somewhere including loan sharks and later plain defaulting. The only other explanation we have for how people can pay to live when they have only 45.8% of the money actually needed is they either have additional sources of unreported income, or they are in debt. The study is by consumer units. These are families, single persons living alone or sharing a household with others but who are financially independent, or two or more persons living together who share expenses. Therefore we cannot even say people are moving back with Mom and Dad to explain the massive gap between what people have to pay versus what they can earn. Additionally, one would hope people move in an out of the lowest income quintile, but like the American dream, that too is a myth. The social mobility statistics of America say this isn't probable anymore, one has about 4% chance to get out of this income brackets.

The statistics of America continue to paint a dark, foreboding and bleak picture and this report is just one stroke of the brush.

What about System D?

Folks, System D is a term for the underground economy and we know there are two realms, illegal labor and illegal drugs, oh, I guess 3 illegal sex trade.

Has to be, for we all know making $10k a year, there is no way to rent even a roach motel in many areas of the country.

One good thing indicated by graph #1: Expenses (I assume that even includes big screens and eye Pods, Phones & Pads) has only gone up 200% since 1984, while incomes have increased by 300%. There appears to be an underground "cardboard box" trade. Therefore, one possible solution: do not rent or buy cardboard boxes - they're generally available free if one knows where to look. Snead

Too bad Sherlock Holmes is dead ... and was imaginary. But perhaps another detective will solve this one.

The black market is large and in a scholarly way I hope that explains it because otherwise social scientists are not doing well.

A trailer in rural Oklahoma or Florida? Come on. That's $300-$500 a month, still. [Note there are hundreds of thousands of people paying $500 a month rent in New York City (under rent laws). But I remember looking for a place in upstate NY in the 90s in a thriving medium sized town and I could have gotten something for $300 or $400. So, no. Rent $5000 or less for a year very doable, especially with roomates.

Could be that; technically the unemployed can live off savings and then there is the elderly.

Combination of the above?

$10,074 per year is $839.5 per month, take home. Food for one by the low balled USDA numbers is between $204-$371 per month for an adult individual and there the USA claims women can eat way less than a male, which should say something about their estimates. Now, we have transportation, health care, clothing, utilities, such as heat, water and these expenses are mandatory to live.

Sorry, even under rent control in NYC, which means someone has been there for over 20 years and are not a large percentage of rentals, is an amazing showing of denial when it comes to the plight of 20% of America.

Whatever mobility is, 5% to 10% or whatever, that is what people do, not what opportunities there are. Anyone can be a millionaire in the USA by the time they are 40 and it's not fantastic. The world needs lawyers, doctors, engineers, consultants, computer specialists, etc. and all it takes is time (not a lot of money). The public school system and libraries are abundant to provide a sober diligent student the means to gain those skills in life.

But how many coast through until 35 having a fun life and the grouse?

The American Dream is better than ever; ask those poor dirt-caked aspirants who risk limb and life and often lose limb or life to get here from everywhere else. Places where there are no dreams, just dirt-poverty or some kind of corrupt compliance with a fascist system.

This site overviews all sorts of statistics and being in denial, writing an opinion simply does not make it so. The reality is the U.S. has terrible income inequality and also very low social mobility. The opportunities to pull one's self "up by their own bootstraps" are simply not there by the statistics and the facts. One statistic, the fact that 53% of those graduating from college cannot get a job should really show this, that's people who actually made it, in spite being saddled with debt, being denied opportunity not just in their field of study, but general work.

Everyone is mystifies as to how the lowest incomes get by with spending twice what they have. This is how I did it-and it is not anything one desires, but rule no 1: Do what you have to do. Know or find out every available source of charity-Catholic Service League, WIC, ect-, usually utilities are covered by some sort of sliding fee scale or percentage of income payments, winter help is available for heating, Most people eventually have huge balances that will be problematic if they ever get a real income, or they fail to make even the small winter payment sum-all summer bills are due in full-and hopefully a little extra that applies to their balance. make use of clothing and food banks, usually these are limited to 1 or 2 visits a year. Do without a phone, cable, entertainment, bank, convenience, and anything you cannot learn how to do for yourself. cooperative efforts with neighbors should be pursued for sitting, lawn work, and anything people can possibly share be it duties, food, errands, repairs. The lower incomes do seem to have a better sense of community than you might think-=though healthy distrust is also present.

Many bills will still go unpaid-many times you make one payment due in full and short all the rest-sometimes you just cannot make them all even in part-prioritize as best you can roof number one-utilities and food, and hope always for something, anything to break your way, if only for a minute. Do what you can, try not to worry about what you cannot-and put one foot in front of the other-the alternative is to lay down and die. Most end like me-with a credit record beyond redemption, unbanked, unemployed-possibly unemployable, and doing the same thing as always-scrambling day to day to maintain hope, and the current tenuous conditions of house and food. All that the poorest of us cannot cover is spread around to those who can, regardless of what we want, or weather they are so inclined to cover our bills.

I would rather work-as it is very much easier all around-but my last career went to India, and despite my willingness, and availability being optimum, I can not even work off my debt to those I owe-at least my offers have been unanswered as yet. Outside of that I assume the losses will continue to be spread to others, and not much else will change.