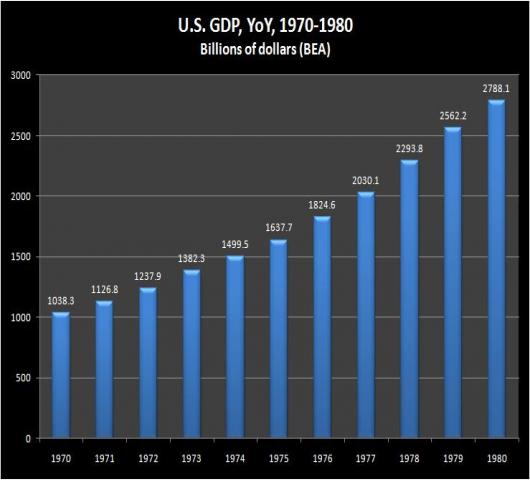 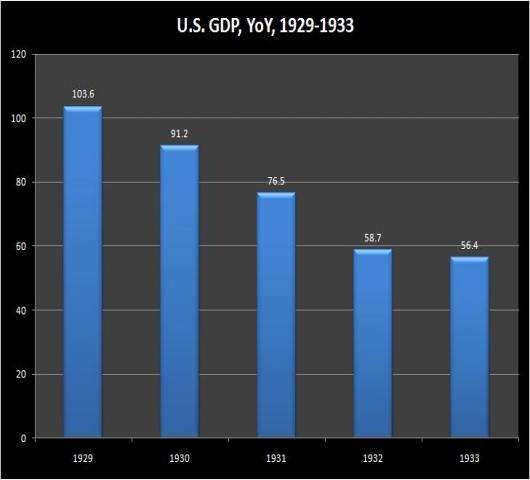 However, when The Great Stagflation is subjected to the critical observation of an ounce of gold, the contraction of the economy easily exceeds both the present contraction of economic activity in intensity, and its more infamous companion of the 1930s in both intensity and duration, as shown below. 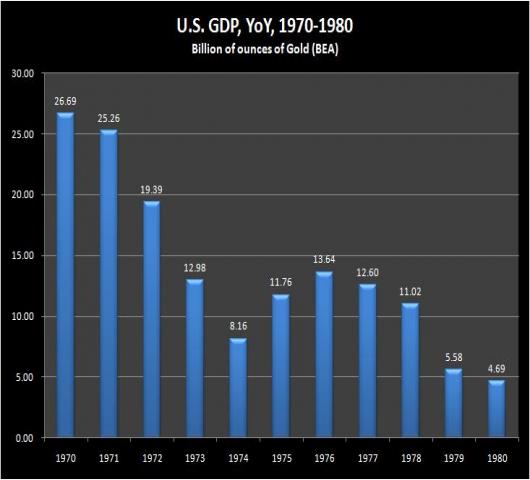 Moreover, in this snapshot of the decade we can see evidence of the 1973-1975 recession, which bottoms in 1974, yet shows no evidence of its existence on chart 1 above. It appears as a dead cat bounce – a momentary recovery before the final leg of the depression unfolds.

Be that as it may, the Great Stagflation presents a bit of a problem: Although gold tells us it occurred, Gross Domestic Product, as measured by dollars, actually ended higher than it began in the 1970s contraction. Peak unemployment, though higher also, was nowhere near the peak of the Great Depression. U.S. trade volume positively exploded, whereas it viciously contracted during the Great Depression. Here is a comparison between these two depressions, with the current Great Recession thrown in for good measure. 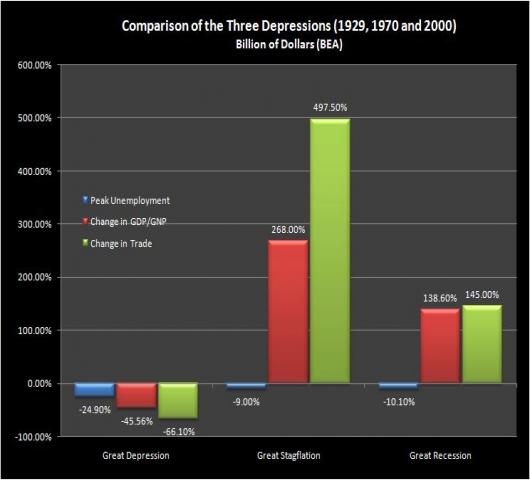 When we use the price of an ounce of gold to measure the progress of the current depression an altogether striking contrast emerges with the official portrait. Not only are we in a depression-like event, but that depression has been clearly evident since 2000. 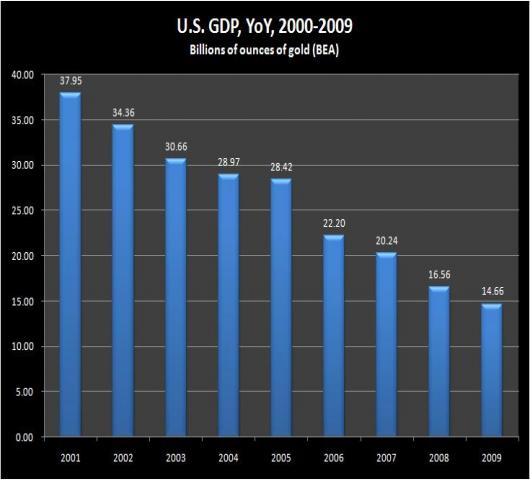 Again, between 2004 and 2005 we see evidence of some slight flattening in economic activity, as the housing bubble reaches its crescendo. The bounce, however, is nowhere near that of the 1973-1975 period.

The real similarity here is to the steady progressive decline of economic activity during the Great Depression as shown in chart 2 above. There are two possible explanations for why these three depressions appear so different: Either gold is wrong, and what happened in the 1970s wasn’t a depression. Or, gold is right and the accepted definition of a depression is wrong.

So, how do we break this analytic impasse?

The important thing to remember here is that until 1933 there was only one measure of GDP. As the Great Depression unfolded it was expressed in the single footprint of a dollar pegged to a definite amount of gold. When the economy crashed in terms of an ounce of gold, it also had to crash in "dollar" terms, since the dollar was backed by gold.

The site is truly missing the great stagflation and frankly I think we should be looking at 2001, the great job exodus to China, because I suspect this has a large "structural" (i.e. we shipped your job to China and India) component than realized.

but I don't quite get at all the Gold connection. I'm not a gold bug so maybe that's me.

Nice graphs but what is the unit for GDP during the Great depression period?

I am not a "gold bug" either. Gold is an analytical tool for me, not a speculative metal.

What I am proposing is if you want to understand the Great Stagflation and the Great Recession you should continue to keep your eye on what is happening to the economy in terms of an ounce of gold. Economic indicators measured in dollars are a misdirection.

I have more data to discuss on this subject.

Nixon took the U.S. off of the Gold Standard in 1971 and ushered in the era of derivatives as a side effect.

I don't know much more about international currency exchanges, during 1971, pre than that, so I guess I should read up?

Just a minor note and just something to think about for next time, this is more of a blog post than an Instapopulist. Not a big deal.

"this is more of a blog post than an Instapopulist."

How do I move it? Let me know.

I can move it for you but it entails breaking the link. Most of our readers come through RSS feeds, and all posts go out through the RSS. How about just leave it for now and after we have the Instapopulist "full" with new posts and in the Instapopulists I put the EIs with the FRED charts I use, plus my snide comments sometimes and then for short posts like "SEC slaps GS's wrist" and so on.

Blog posts go into your own personal RSS feed, every registered member has their own blog on EP de facto, so if you want to link to just your own writing, you can just grab your own feed and link.

So, howz that? It's a "trick" I use that won't break the current link but also move it to your blog in a bit. Remind me if I forget, just a few days.

You also have your own upload space for charts and if you're really ambitious, the site does have a version of LaTeX for equations, described in the admin forum.

This is just the beginning of an idea I am developing on the subject - I think it might be fruitful to the discussion on a number of fronts...

Your friendly neighborhood admin changed this posts content type to blog. It should now pop up on your RSS feed. ;)