The Wall Street Journal has a scary story up. It seems public pension plans believe they will get an 8% return on their investments and are playing the great stock market roulette wheel accordingly.

The median expected investment return for more than 100 U.S. public pension plans surveyed by the National Association of State Retirement Administrators remains 8%, the same level as in 2001, the association says.

The country's 15 biggest public pension systems have an average expected return of 7.8%, and only a handful recently have changed or are reconsidering those return assumptions, according to a survey of those funds by The Wall Street Journal.

Below is a decade chart of the Dow Jones, the Nasdaq and the S&P 500. What's wrong with this picture? 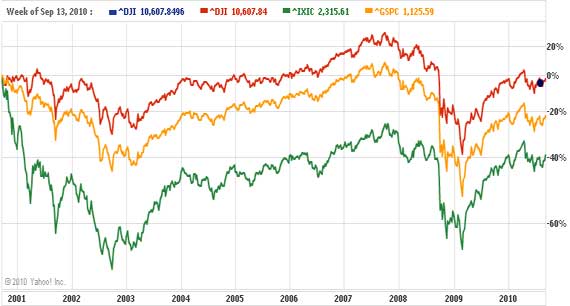 Even worse, the Wall Street Journal is predicting a taxpayer bail out of the public pension funds, due to this bubble economy investment faux paus. As we can see, funds hitting an 8% return are like winning the lotto as a retirement strategy.

Recall, after the 1930's stock market crash, pensions and retirement were not tied to the stock market like they are today.