February 2013 Retail Sales increased, by 1.1%.   Gasoline sales shot up 5.0% from January on higher prices. If one removes gasoline sales from retail sales, overall the increase from January would have been 0.6%.  Auto sales increased 1.1% and minus all autos & parts but including gas sales, retail sales increased 1.0% from last month.  This report should alleviate Wall Street's worries people are so tapped out they have stopped spending.    It didn't happen, yet.    Retail sales are reported by dollars, not by volume with price changes removed. 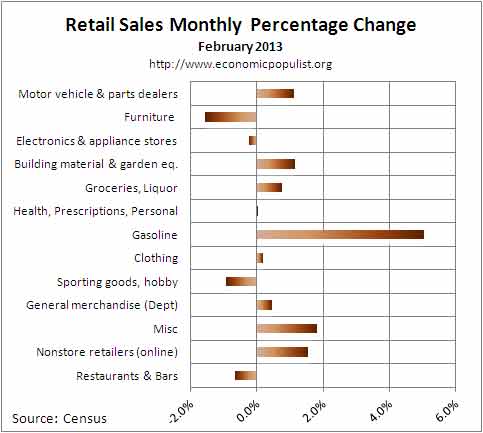 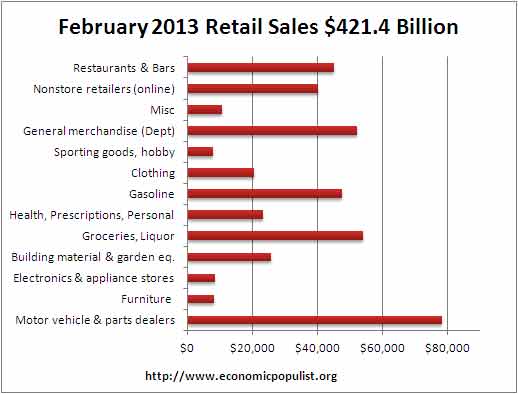 For reference sake, graphed below are weekly regular gasoline prices, so one can see what happened to gas prices in February. The below pie chart breaks down the monthly seasonally adjusted retail sales by category as a percentage of total February sales by dollar amounts.  One can see how dependent monthly retail sales are on auto sales by this pie chart.  We also see non-traditional retailers making strong grounds on traditional general merchandise stores. 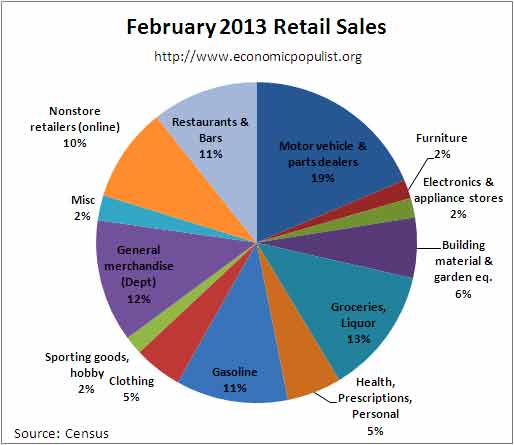 Retail sales correlates to personal consumption, which in turn is about 70% of GDP growth.  Yet GDP has inflation removed from it's numbers.  This is why Wall Street jumps on these retail sales figures.  Below is the graph of retail sales in real dollars, or adjusted for inflation, so one gets a sense of volume versus price increases.  Below is the annualized monthly percentage change in real retail sales, monthly. To obtain real values, retail sales are deflated using CPI.  Below are the real retail sales quarterly annualized percent change.  The graph displays up to Q4 2012. Below is a graph of real PCE against real retail sales, quarterly.  See how closely the two track each other?  PCE almost looks like a low pass filter, an averaging, removal of "spikes", of real retail sales.  Here are our overviews for PCE.  Here is our overview of Q4 GDP. As always I love your charts and explanations.

Why Thank you. Takes longer, we'll never be "first", yet by taking the time and graphing out the statistics, so often we discover that the headline buzz has nothing to do with statistical reality.

This report is a Wall Street favorite. They don't seem to give a rats ass about hiring America, just make sure they keep spending. So warped.