August 2013 Retail Sales increased by 0.2% on auto sales, which increased 0.9% from last month.  Motor vehicle dealers are having a good year.  Their sales have increased 12.3% from a year ago.  Without motor vehicles & parts sales, August retail sales would have been a 0.1% increase from last month.  Building materials and clothing dragged retail sales down as they declined -0.9% and -0.8% respectively.  July retail sales were revised up by 0.2 percentage points to a 0.4% monthly increase.   Retail sales are reported by dollars, not by volume with price changes removed. 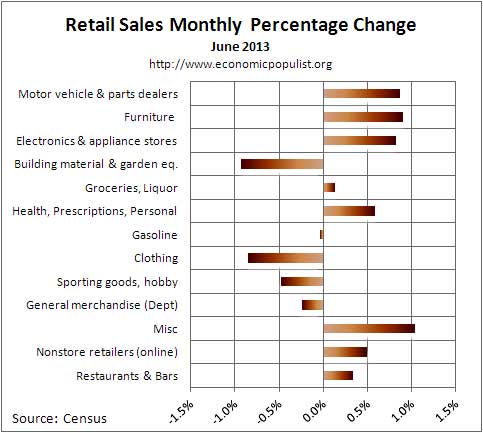 A surprise, gasoline station sales have declined -1.5% from one year ago.  Sporting goods, hobbies, books & music sales have increased 3.4% from last year. &nbsp Motor vehicles & parts sales overall have increased 10.9% from last year, which implies parts by themselves are less.  The ones that are hurting are Departments stores.  Their retail sales are down -5.3% from August 2012 with general merchandise stores, where department stores are a subcategory, have declined -0.3% from a year ago.  Building materials, garden sales, which are large by volume, have increased 7.6% from a year ago.  Grocery stores have increased sales by 2.9% from this time last year.  Below are the August retail sales categories by dollar amounts.   As we can see, autos rule when it comes to retail sales. &nbsp We also see that electronics, which are up 3.1% from a year ago, is much smaller by total dollars than motor vehicle sales.  This implies there is a hell of a lot of hype around smart phone sales in terms of the overall economy.  Amazing how Apple can use the press instead of pay for advertising to hype their products, quite a shocking market trick, but in terms of the U.S. economy, a drop in the bucket. 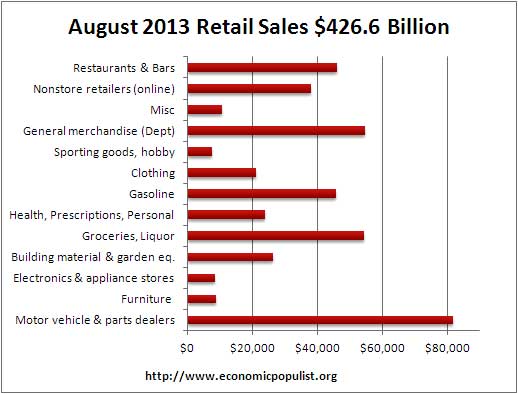 Graphed below are weekly regular gasoline prices, so one can see what happened to gas prices in August.  Gas was $3.574/gal. in August and we can see it was flat, which explains the flat sales for gasoline stations and the annual decrease.

The below pie chart breaks down the monthly seasonally adjusted retail sales by category as a percentage of total August sales by dollar amounts.  One can see how dependent monthly retail sales are on auto sales by this pie chart.  We also see non-traditional retailers making strong grounds on traditional general merchandise stores. 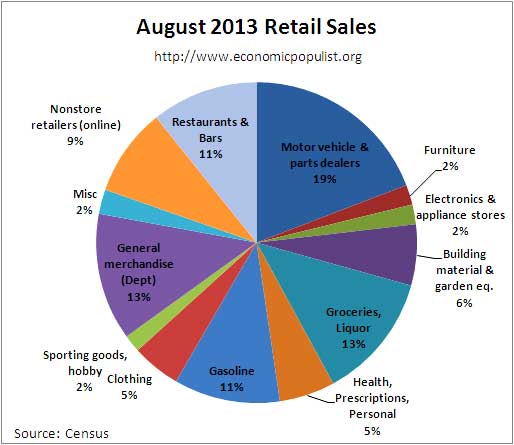 Retail sales correlates to personal consumption, which in turn is about 70% of GDP growth.  Yet GDP has inflation removed from it's numbers.  This is why Wall Street jumps on these retail sales figures.  Below is the graph of retail sales in real dollars, or adjusted for inflation, so one gets a sense of volume versus price increases.  Below is the annualized monthly percentage change in real retail sales, monthly, up to July 2013.  While some in the press are claiming retail sales implies poor consumer spending, it looks like slightly higher consumer spending than Q2 for now, although to really estimate PCE we need the actual monthly statistics. To obtain real values, retail sales are deflated using CPI.  Below are the real retail sales quarterly annualized percent change.  The graph displays up to Q2 2013. Why Wall street would think there would be magical sudden gains in retail sales in beyond me. Wages are down, people are out of work and credit is also down. Gotta wonder if some in the press even read these reports, or have the faintest fell for them before writing.

July revisions showed that for the 2nd consecutive month, the upward revision to the previously reported monthly sales gain alone was actually greater than the entire sales gain of the reporting month.... total retail and food services sales for July were originally reported at a seasonally adjusted of $424,481 million, up just $832 million from June sales; that has now been revised to show sales of $425 657, a $1.815 billion or 0.42% increase over June sales, which are now shown to be at $423 842; hence, this "August" report in effect added $983 million to July's sales...meanwhile, August sales as estimated at $426,563 were up $901 million from July's $425,657 million....so what looks like a weak report is actually shows more than twice as great a sales gain as the headline indicates, due to revisions, which is exactly what we observed in our post on retail last month...

That's right, the revision doubled July's gains in addition to not interpreting this report well by the press.
Are you talking about the margin of error and the fact this is advanced, will be revised?

Probably should have spelled that out more, one would think readers would see 0.2 percentage points to 0.4% monthly gain = double, but that assumes one has a "numbers brain".

This is so ridiculous how traders jump on this and initial claims. In the big economic indicator scheme of things, neither is that important.

the last phase was a hook back to my coverage on retail here last month when a similar upward revision was included and widely overlooked...my point is that the last two reports are stronger than the headlines suggests because in effect they both added 0.4% MoM to retail sales..

moreover, some of the retail businesses reported as weak last month were really much stronger...sales at building material & garden supply stores, originally reported down 0.4%, were actually up 1.8% in July, and non-store (online) sales, who had their July sales reported nearly flat at 0.1% last month, are now seen to have increased sales 1.3% for the month...

This is the #1 reason I put up so many graphs, generally speaking. Wall Street focuses in on the monthly percent change instead of the trend and overall volume. This report is similar to initial claims, durable goods new orders and housing data, always revised.