Sponsored by the Koch Brothers - Freedom to Wage War on the U.S. Middle Class, yeah, that's what America is all about.

Johnny McNulty brings you A Better Constitution for the United States: 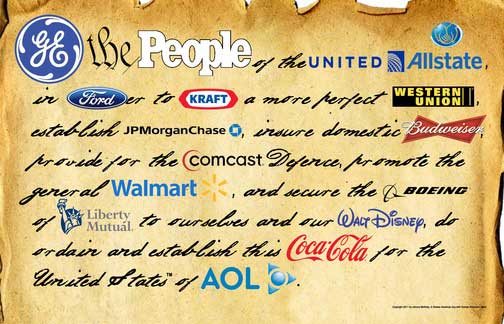 A Message From Netflix Congress issues note saying, "We Need $12 Trillion Or All These Kids Die":

House Speaker John Boehner (R-OH), who has emerged as spokesman for the bipartisan group, informed FBI negotiators this morning that the ransom was to be placed in stainless-steel suitcases and left on the Capitol steps by 4 p.m. sharp. If their demands are not met in full, the 11-term representative announced, "all the kids will die."

"Bring us the money and we let the children go, simple as that," said Boehner, appearing in the East Portico with a serrated switchblade held to one of the fourth-grader's throats. "If you want to play games and stall for extra time, we're going to shoot one kid an hour, starting with little Dillon here." Folks, if you watch anything, stream the AmeriFam above. The skit is like it is tailor made for this site and I know you'll all not only laugh but say dead on for this one.

One can say the U.S. middle class is being screwed with graphs, texts, data and also humor and this one hits the nail on the head.