Brought to you by SuperPacs - Making ridiculous political ads a multi-billion dollar industry.

Good Morning! Rise and Shine! Get that Cup O' Joe...
break out the O.J....hang out with the pooch...time to check out the economic funnies. Breaking News.... If the jobs were meant to be here, they would come back on their own.

WASHINGTON—Following a two-day meeting to discuss the country's continually disappointing employment numbers, officials from the Federal Reserve announced Friday that if jobs are really meant to be with the American people, they’ll return of their own volition.

In Depth.... Couples prepare for retirement by increasing their nest egg of debt:

BRIMLEY, MI—Local couple Matt and Wendy Ratliff told reporters Tuesday that they have been steadily building up a nest egg of debt to make sure that they always had something tucked away to owe banks and creditors no matter what the future held. "We've been saving a little debt each year for about 15 years now, which might not sound like much, but as the debt grows over time, it will hopefully provide us with a nice chunk of debt we can dig into later on if we happen to run into any unexpected prosperity," said Wendy Ratliff, 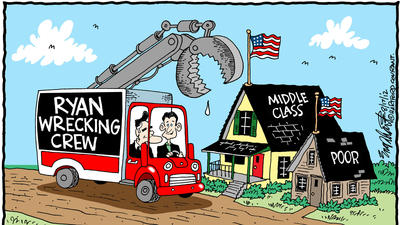 New Study - Poor very grateful they are not part of the middle class.

CHAPEL HILL, NC—A survey released Wednesday by researchers at the University of North Carolina found that despite the many challenges they face, the nation's lowest-income individuals are nonetheless thankful they don't have to endure the unique hardships of the nation's long-suffering middle class.

According to the report, the 46 million Americans who fall below the federal poverty line, though struggling mightily, are at least glad they don't have to live up to some rapidly vanishing American dream of advancing in their career, making more money, and improving their lifestyle, the way their middle-income counterparts do.

Let's run some "real news" and then ask yourself if it could be right in The Onion. Real news:

1) Banks need more money from taxpayers, already spent sizeable amounts on cocaine and prostitutes and vacations;
2) Banks continue to launder money for foreign terrorists, government concerned with Americans bringing 6 ounces of liquid on planes;
3) CEOs using software to reject tens of thousands of Americans for openings, don't know how to find skilled workers;
4) Companies are tired of government intervention, demand greater subsidies from government;
5) Free market capitalists demand government leave them alone, free market capitalists currently lobbying candidates, politicians, and officials in federal, state, and local agencies to ensure they get what they want;
6) Banks payoff regulators, banks claim if anything was wrong, the regulators they paid and lobby would step in and stop them;
7) American companies are tired of "overqualified candidates," seek applicants who can barely walk and talk at the same time;
8) College graduates must work for free to prove they have the right fit with corporate culture that demands sacrifice from everyone below the CEO;
9) Media repeats same keywords on every station and same stories - those who think this is more than random are labeled conspiracy nuts;
10) Companies and politicians tired of government intervention - demand the military and State Department step in to protect their infrastructure and personnel overseas;
11) Government officials sign pledge they will not raise taxes - same officials are tired of people protesting and exercising rights under Constitution;
12) Politicians are sick of people collecting benefits and want to end government assistance, politicians keep collecting government paychecks and enjoy government benefits;
13) TV anchors claim Americans are just lazy and should settle for less - same anchors throw hissy fits when they aren't given millions more per year for reading teleprompters;
14) Politicians and companies demand people work until they die because they have it too easy, companies refuse to hire people over 30 because they are too old;
15) Politicians claim there are jobs out there and people don't take them because they are lazy and unskilled, at least 4 people for every job opening, with dozens per actual opening;
16) Manager fired because employee stole small amount of money, manager faces criminal charges quickly; banker steals $1.2 billion dollars, answers a few questions, and continues on collecting money for politicians and enjoying wealthy life;
17) Man tries to bribe police officer, currently in jail facing charges; man bribes hundreds of police officers internationally, currently lobbying law enforcement and politicians;
18) Millions of people claim they are applying for jobs but constantly ignored and rejected for year after year - they are called lazy and unskilled and liars by media and politicians; ex-Microsoft CEO personally appears in front of Congress and claims he cannot find any Americans to do jobs, he is praised by Congressmen and they don't call him a liar;
19) Companies claim they cannot find skilled and educated people to do jobs in USA; companies relocate overseas where they find candidates with no skills and less education and hire them immediately
20) Life-long politicians that inherited wealth and companies from families tell Americans to just work as hard as they did and they would succeed
21) Political candidates claim unemployed only have themselves to blame for anything that goes wrong; political candidates blaming everyone but themselves for not winning office
22) Banks launder money for drug cartels that risk destroying entire nations and kill tens of thousands of people; politicians collect money from banks and blame soda cartel for risk it poses, demands people not be allowed to buy big soda while getting angry when asked about banks and corruption
23) Government having trouble finding skilled individuals who are motivated to work; usajobs.gov automatically rejects tens of thousands of candidates daily, opens and closes positions with 24 hours, and keeps candidates hanging on for 3+ years
24) Government concerned with Iran and places sanctions on banking with Iran while paying thousands of people to combat money laundering; government upset when a regulator finally tries to stop Iran money laundering after 10 years of silence

"The Onion"? Nope, pure truth. Every single one. And thousands more.

Very true and why I go putting these collections together but you just added an original!

1) "The unemployed need not apply for work, companies are only hiring people currently working and claim talent shortage" - by the way, whoever follows that policy, Satan has a very special spot for you in Hell, really, he does. That type of thinking destroys people who need jobs and hope desperately, and you are spitting in their faces;
2) The unemployed shouldn't refuse ANY JOB, politicians force unemployed surgeons to fill in jackhammer positions for benefits, teachers to work as strippers, and librarians to work as corrections officers (could see this happening);
3) Companies take years to fill a position while collecting paychecks for complete inaction, then ask the unemployed why they haven't been hired in years and what have they been doing;
4) Businesses praise the vets serving overseas, then HR asks them if they ever had a "real job" when applying;
5) TV hosts that dropped out of college or got a degree in a liberal arts subject bemoan the lack of educated, dedicated workers and complain about how useless liberal arts are;
6) Businesses need American consumers to purchase their goods and go into debt to buy houses, politicians blame American consumers for taking on too much debt and buying houses they can't afford;
7) Politicians say Americans are unwilling to get the necessary degrees, while holding out icons to the public that did not graduate their colleges (e.g., Steve Jobs and Bill Gates);
8) Drugs for consumption by Americans is bad, national production of opium in Afghanistan and speed in Burma is okay;
9) The unemployed aren't submitting quality resumes and acting professionally, say the HR representatives that misspell ads and show up two hours late for interviews;
10) Businesses demand applicants put entire lives online and create numerous profiles, applicants warned not to share too much (i.e., praise corporations and govt. only and make sure you can somehow hide your age, race, sex, etc.);
11) Citizen forges signature, tried for felony and goes to prison; corporation forges tens of thousands of signatures to illegally foreclose on houses and receives government bailout; and
12) US citizens find it difficult to pass exhaustive background checks for simple jobs in the US; US companies and govt. letting China and India handle extremely sensitive technology and documents overseas.
13) Companies claim they simply can't find enough qualified workers, but defying laws of supply and demand, wages still dropping and nurses pay to work in some hospitals.

This gave me a good laugh this early Monday morning while waiting for my coworkers to get to work.