These public figures and many more promised to correct the chaos and depravity of the Bush era. It’s all a scam. A new war, more bailouts for Wall Street, the continued assault on the Constitution, and lower taxes for the super rich are what we got. 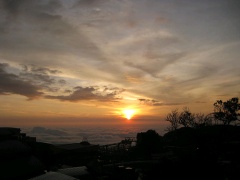 Some of us have known this for a long time. Some of us just found out and some will find out very soon. There are few, if any, elected officials who really care about our interests unless we're one of the few thousand ultra rich who control Congress and the White House. (Image)

The Obama-Republican tax plan was just approved in the United States Senate. It will become law soon. What did we lose?

The Senate put the Social Security system at risk with a 33% cut to employee payroll taxes, from 6.2% to 4.2% of wages. Social Security is doing well with a $2.5 trillion surplus. But this major change begins the starvation of the system. Those who voted in favor will turn around sometime soon and say that Social Security is faltering. Of course, their cynical actions will be at fault. They'll conveniently avoid mentioning that.

The Obama-Republican plan keeps the tax rate on investment income (capital gains) well below the rates for income taxes and below the capital gains rates in 2000. Wall Street ruins the economy with their shady deals then gets more tax breaks on their shady stock deals.

The wealthiest citizens get an extension of the "temporary" Bush era tax cuts.

We're told that these huge tax cuts are worth it because they'll get the economy going again by producing jobs. We had nearly 10 years of the Bush tax cuts and guess how many new jobs have been added to the economy? None, when you factor in population growth.

These tax cuts will cause $900 billion in lost revenues. Supporters of these tax breaks will talk your ear off about balanced budgets. Apparently, they see no connection between giving away $900 billion and increasing the budget deficit.

This legislation has nothing to do with new jobs or a balanced budget. It's all about enhancing income of those at the very top.

Senator Bernie Sanders said he'd stop the madness. Last Friday he stood up and spoke for hours outlining the glaring problems with the Obama-Republican program. People thought it was a filibuster. It wasn't. There was no legislation to filibuster on Friday. Yesterday, when it really counted, Senator Sanders sat on his hands as the one sided brawl between The Money Party and the people took place on the Senate floor. There was no filibuster. Mighty Bernie had struck out.

But Sen. Sanders performed a valuable public service for those in charge. He provided the appearance that there might be at least one principled Senator left who was ready to hold the line.

We need our "heroes." Without them, we might realize that we're entirely on our own in the fight against the wholesale theft of the peoples' hard work and wealth.

Before Sen. Sanders, there were the liberal Democrats in the House of Representatives. They promised to vote against the president's health care reform bill if it didn't have a viable public option. Guess what? They sat on their hands just like Senator Sanders as health care reform became a health insurance industry bailout.

Before Sanders there was presidential candidate Obama. He was the breath of fresh air, the sincere man for the people with the brains to pull off real "change." But we had to have "hope" and before that, we had to believe him.

These public figures and many more promised to correct the chaos and depravity of the Bush era. It's all a scam. A new war, more bailouts for Wall Street, the continued assault on the Constitution, and lower taxes for the super rich are what we got.

The appearance of a political opposition is the essential window dressing required to fool people into thinking that there's actually more than one side that will be heard on any public issue. There isn't. The ultimate winners are the great accumulations of wealth represented by that bipartisan coalition that has no permanent friends or enemies, just permanent interests - The Money Party. 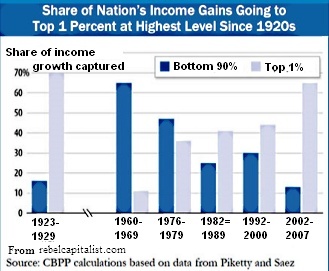 The Money Party is on a roll. From 2002 through 2007, 70% of the nation's income growth has gone to just 1% of the population. That 1% wants an end to Social Security, even more tax cuts, and capital gains tax rates well below the income taxes the rest of us pay.

There is no time to feel disappointed, upset, or betrayed by the big con game masquerading as democracy. There is no reason to expect that any political leader will be honest. For those we allow to lead, the only incentive for honesty is a fear by politicians that they'll be tossed out of office and prosecuted for fraud if they fail to do their jobs.

The United States is still a great country because the vast majority of people are hard working, honest, and willing to live peacefully with their neighbors and, when given a chance, with the rest of the world. The enemies of greatness and progress are the politicians and their patrons who insist on having their way on every issue, who take every thing that isn't nailed down; and, who create fake dramas and diversions to further the distortions and censorship of the corporate media . They will not go quietly into the night. They will employ every trick available to retain power.

An effective movement for real change should express the positive values of the vast majority. Of fundamental importance, it requires citizens who trust elected and appointed official only while those officials prove their fidelity to the peoples' interests and the laws of the land. If you want heroes to do the job, just remember all the false heroes we've endured.

If we're willing to reach the end our life justified by the fight rather than the victory, informed by principals rather than personalities, we acquire an enduring wealth beyond the reach of those in charge.

This article may be reproduced in part or whole with attribution of authorship and a link to this article.

They are still running that line. He never was a Progressive. So, here we are, heading towards the rest of the destruction against the middle class. They will never get the tax structure where it should be, a progressive tax. I expect more regressive taxes coming.

Oh yeah, those business credits, they aren't creating jobs either. I think we need to write more about policies that would create jobs, such as banning all government money from being used for offshore outsourcing.

Seriously, I give up. I'm too damn old and infirm to man the barricades.

I've beat my self senseless trying to make american democracy work, it's a lost hopeless cause.

What happens now is going to happen with or without me. I feel sorry for the young people coming behind me, it's up to them now.

The way I see things it's going to take at least three generations to set things right.

The present generation to be ground under, the next to live in serfdom, and the third to find the path back to freedom.

I said the same thing to a couple of fourty somethings I work with. I'm finished with it.

I'll shut up and tend my garden. We will need the food.

Now the attack on social security is mentioned by the Wall Street Journal. At least their numbers are accurate and without social security, we've got a whole generation of old people, homeless, starving in the street.

It is absolutely ridiculous, the "press" has gone full throttle being a spin machine. While they congratulation Obama, people like Simon Johnson are pointing out they just set up the next economic crisis, due to the massive debt.

Of course taxes have little to do with the real reasons the economy isn't growing or producing jobs.

After cutting 2 percent off the individual and corporate side of the payroll tax, the next shoe to drop is cutting SS, UI, Disability and Survivor Benefits. The entire SS system is now on borrowed funds and the Republicans will next say how this is unsustainable and must be cut, unless the payroll cuts can be put back miraculously by a Republican Congress.

The only way out of here, aays the joker to the thief, may be to create a Service Based Retirement System based on the core services the retirees need like food, all utilities, transportation and housing for the disposessed. That system could be funded by the same corporate side of the payroll tax plus vouchers given back to those robbed by the cuts: the individual plus corporate 2 percents.

Utility deregulation has brought about pricing of 60 percent of conventional(WhiteFence.com) utilities. Same can happen with food and public transportation. If nothing is done, there will be hunger in the land. Again, the social contract for current retirees, is breached.

Remember that starve the beast mantra, in order to justify cutting SS and what's left of any social safety net? Simon Johnson originally worked at the IMF, which has had it's sights also on SS (notice the IMF was involved in "austerity" programs).