The Social Security administration announced there will be a 1.5% increase in social security benefits next year.  The cost of living adjustment is fairly low, but if chained CPI had passed Congress and was used, the situation for social security increases would be much worse.

Q3 2012 real GDP shows 2.7% annualized growth, revised from 2.0% in the advance report. There was a significant upward revision to inventories, yet consumer spending was revised down. Exports were revised up as trade statistics became more complete. Q2 GDP was 1.25%.

The BLS unemployment report shows total nonfarm payroll jobs gained were 171,000 for October 2012. September payrolls were revised from 114,000 to 148,000 and August was also revised upward, from 142,000 to 192,000. The below graph shows the monthly change in nonfarm payrolls employment. 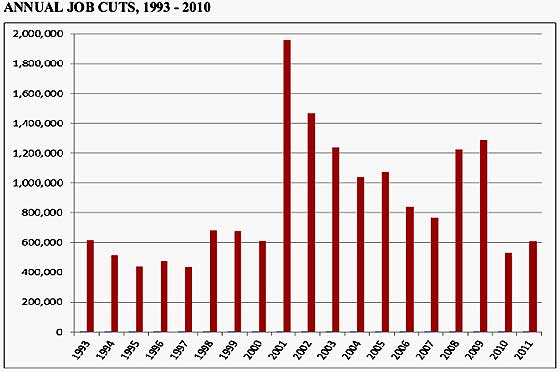 Surely this is a Populist move. The Obama administration is planning on Ordering Pay Freezes for Federal Workers.

The president’s proposal will effectively wipe out plans for a 1.4 percent across-the-board raise in 2011 for 2.1 million civilian federal government employees, including those working at the Defense Department, but the freeze would not affect the nation’s uniformed military personnel. The president has frozen the salaries of his own top White House staff members since taking office 22 months ago.

The pay freeze will save $2 billion in the current fiscal year that ends in September 2011, $28 billion over five years and more than $60 billion over 10 years, officials said.

Federal employees only make up about 2-3% of the total workforce. There was a USA Today article which got people's panties get all in a bunch about the low unemployment rate and much better pay for Federal employees versus private ones.

Some lawmakers are planning to use the lame-duck session that starts Monday to challenge the president's plan to give a 1.4% across-the-board pay raise to 2.1 million federal workers.

It seems this move by the Obama administration is to head 'em off at the pass. This stops the GOP wanting to make this an issue as well as avoids a 10% pay cut for Federal Employees. Instead of course, doing something to raise the pay of the private sector.

Here are some statistics from the USA Today article:

Moody's has estimated 400,000 jobs from State, City and Local governments will be lost next year due to budget cuts.

Up to 400,000 workers could lose jobs in the next year as states, counties and cities grapple with lower revenue and less federal funding, says Mark Zandi, chief economist for Moody's Economy.com.

The Center for Budget and Priorities has the estimate much worse, a total of 900,000 jobs affected.

it will slow the economic recovery and raise the risk that the nation will fall back into recession as the loss of Americans’ spending power ripples through the economy. States’ actions to close their $140 billion gap without more federal aid could cost the economy up to 900,000 public- and private-sector jobs.

Even if Congress extends Medicaid subsidies, Zandi expects 325,000 job cuts the next year, though Vitner says losses could be far less.

The Financial Times opinion article declares Return of the State.

You sure couldn't tell it by me. Hey, they call Populists vulgar in this article!

It's an interesting piece though, pointing out that with the financial sector crisis the free market has failed and how other emerging economies, the government is very much at the helm.

Here's the first couple of paragraphs as a teaser, click on the above link to read the whole article.

For the best part of three decades, policymakers in the developed world followed Ronald Reagan and Margaret Thatcher in seeking to roll back the frontiers of the state. The triple mantra of privatisation, liberalisation and deregulation held sway.