Anyone who has followed the discussion about wages is already familiar with the fact that since 1979 wages have remained flat (and in many cases, have declined) — and a lot of that has to do with the decline of labor unions. The Economic Policy Institute has a collection of papers (link, link) showing that the erosion of collective bargaining has undercut wages and benefits, not only for union members, but for nonunion workers as well. This has been a major cause of middle-class income stagnation and rising inequality. Even though millions of workers desire union representation, they are not able to obtain it.

And despite what many of the pundits claim, the current job market is really not that tight (not with hundreds of thousands dropping out of labor force every month) — and another reason why wages remain so dismal. With an over-saturated job market, there's no pressure to raise wages. Job ads are posted, but rarely are there real jobs behind them. Employers aren't employing because they've been doing more with less (link, link, link, link) — while others may be foolishly holding out for the mythical purple squirrels.

Since the Great Recession, one debate has been about raising the minimum wage — to stimulate more economic activity by creating more consumer demand, which in turn would (theoretically) create more job growth and raise wages. Last July Senator Bernie Sanders introduced a bill for gradually raising the minimum wage to $15 an hour by 2020, saying: "In the year 2015, a job must lift workers out of poverty, not keep them in it. The current federal minimum wage of $7.25 an hour is a starvation wage and must be raised to a living wage.”

Trying to survive on the current minimum wage is especially difficult for people with young children. Child-care costs devour at least 30 percent of a minimum-wage worker’s earnings — and nearly 11 million children younger than 5 in the United States depend on some type of weekly child care arrangement. But do fast-food workers and other minimum wage employees (especially single parents) really deserve a better standard of living?

Yesterday Alan B. Krueger at the New York Times asked in a post titled " The Minimum Wage: How Much is Too Much?"

"The federal minimum wage has been stuck at $7.25 an hour since 2009. While Congress has refused to take action, Democratic politicians have been engaged in something of a bidding war to propose raising the minimum wage ever higher: first to $10.10, then to $12, and now some are pushing for $15 an hour. Research suggests that a minimum wage set as high as $12 an hour will do more good than harm for low-wage workers, but a $15-an-hour national minimum wage would put us in uncharted waters, and risk undesirable and unintended consequences." [In 2013 six Democrats voted against raising the minimum wage.]

"What Krueger seems to be aiming at is a zero risk of overshooting the ideal minimum, as if there were no cost to undershooting it. But surely, if we know that $12 is unlikely to bite back, then a proper balancing of risks should take us somewhere above $12 ... So is $15 the magic number? I don’t know. Like Krueger would probably say, we need more research. But what I do know is that, if $12 is very safe, the right number is higher than that."

Compared to the U.S., what do minimum wage workers earn in the "democratic socialist" countries of Europe?

And what about our friends "Down Under?" In New Zealand the minimum wage is $11.59 an hour for those under 18 years old, but it goes even higher to $14.25 for those over 18 years old. That's almost twice what it is in the U.S. — but in Australia it's a whopping $16.87 per hour! So if Crocodile Dundee had never become so rich in Hollywood (and started an offshore tax shelter), he could have at least flipped burgers and still managed to pay his rent.

In Denmark there's no legally mandated minimum wage, but the average minimum wage for all private and public sector collective bargaining agreements was approximately $20 per hour according to the U.S. State Department last year.

But yet, in the good ole U.S.A. — this "exceptional" country — in this land of opportunity — in the richest country on Earth — our "job creators" only want to pay their hard-working American Patriots a measly minimum wage of $7.25 hour (the current minimum wage). That is about half the bare minimum needed to live on, so why do some people say that's too much to live on?

"America as a whole is an outlier among advanced economies. Given the pattern across the rest of the OECD, a group of mostly rich countries, one would expect America, where GDP per person is $53,000, to pay a minimum wage around $12 an hour. That would mean a raise of about 65% for Americans earning the minimum pay rate."

The CEOs and their political puppets also say that raising wages would slow hiring, reduce worker hours, cause layoffs, raise consumer prices and destroy the economy. But what these very same "job creators" never tell us is, if they did raise workers’ wages to an actual "living wage", they also might have to buy one less beachfront mansion, a smaller private jet or a shorter luxury yacht (And they also might have to postpone buying that Maserati or Lamborghini until next year).

The super-duper wealthy job creators have already been threatening to replace fast-food workers (who are earning slave wages) with robots. But the physicist Stephen Hawking says machines won't bring about the economic robot apocalypse — but greedy job creators humans will. He predicted that economic inequality will skyrocket as more jobs become automated and the rich owners of machines refuse to share their fast-proliferating wealth: "If machines produce everything we need, the outcome will depend on how things are distributed."

If that's case, and Hawking is right, then we really are truly screwed — because we can't even get Congress to raise the federal minimum wage to a real "living wage". Instead, Congress might pass another bad trade agreement as the coup de grace to American workers, and offshore more jobs to lower-wage countries. [As an aside: The final leaked TPP text is all that we feared]

Can you live on $556 a month? That's about what a full-time minimum wage worker has left over after paying for rent. 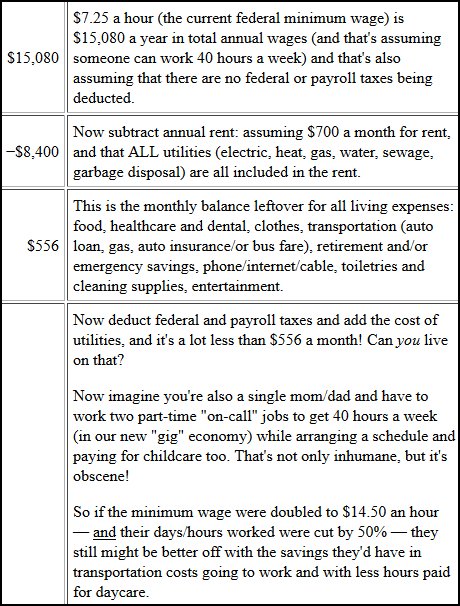 Those countries have strong social safety nets, from free universal health care to day care, while Americans are paying out of pocket for those things, so it's not an apples to apples comparison.

Set them to adjust with changes in the costs of living over time, and you could have a system that would only very rarely need tweaks, if at all.

One problem with a Federal minimum wage is there are variations in the cost of living in various parts of the Nation. Thus one size does not fit all. A $15/hour wage in Manhattan might be the equivalent of $10/hour in Mississippi. Thus it would seem logical to have a tiered minimum wage based on available cost of living indices. Also, by definition the minimum wage should be free of all income taxes. The combination of the personal exemption and the standard deduction should equal the minimum wage rate times 2080 hours per year (adjusted for the differing costs of living). This should also be applied to the States. Sequential exemptions and credits for dependents might be adjusted downward to maintain revenue neutrality. Further, there should be a minimum fringe benefit encompassing vacation time, health insurance, sick leave etc. This should apply to all employers of a given size or larger. Loopholes for contract labor/services and part time employment should be closed.

Key findings include child care costs account for a significant portion of family budgets, and is particularly unaffordable for minimum-wage workers.

END_OF_DOCUMENT_TOKEN_TO_BE_REPLACED

Long-Term Unemployed Baby Boomers in 2013 - 153365 reads
EXPLOITATION, INC.: David Rockefeller and Adventures in Global Finance - 85703 reads
Obama Picks Cheap Labor & Guest Worker Queen Janet Napolitano for DHS! - 74000 reads
Too Many People - Too Little Work - 27857 reads
Creating State Level Jobs Programs: A Jobs Insurance Supplement - 72570 reads
Massachusetts turned Red, but that color isn't what you think it is - 33877 reads
Libya, Gas Prices, and the Big Payday at Your Expense - 52560 reads
The Boys Club of Tech Perpetuated by Foreign Worker Visas - 62075 reads
The Great U.S. Worker Sell Out Through Comprehensive Immigration Reform - 63064 reads
GDP Shrunk at 0.9% Rate in 2nd Quarter on Weaker Consumer Goods, Construction, & Inventories - 15576 reads
Will the NY Attorney General Bring Doomsday Charges Against Wall Street? If So, How Long Will He Survive? - 1189174 reads
New York Post Claims Census Falsifies Unemployment Figures - 911143 reads
Safeway Skewered for Throwing 6,000 Workers Under the Bus in Video Parody - 406877 reads
How Many Jobs Are Needed to Keep Up with Population Growth? - 308139 reads
VAT or Value Added Tax is Getting a Look in D.C. - 302607 reads
U3 and U6 Unemployment during the Great Depression - 285915 reads
House discusses 401k/IRA confiscation - 275288 reads
Tax Cuts for the Rich Do Not Generate Jobs - 264453 reads
The war on the middle class - 261760 reads
Delusions of Normalcy 2011 - Dismal Scientists Cheer Up - 252062 reads
.