The June 2013 S&P Case Shiller home price index shows a 12.1% price increase from a year ago for over 20 metropolitan housing markets and a 11.9% change for the top 10 housing markets from June 2012.  This is a slightly lower annual increase than last month  The national quarterly index increased 10.1% for the year.  Not seasonally adjusted home prices are now comparable to April 2004 levels and the return to the housing bubble price levels is happening rapidly   Graphed below is the yearly percent change in the composite-10 and composite-20 Case-Shiller Indices, not seasonally adjusted.

Below are all of the composite-20 index cities yearly price percentage change, using the seasonally adjusted data.  San Francisco and Las Vegas are on fire as both have increased more than 24% in a year.  San Francisco has jumped a whopping 47% from it's March 2009 low and the entire area has become absolutely insane.  The average home price in Silicon valley is a cool million and rents are so exploitive, even six figure salaries cannot afford them.  Overall the return to the the housing bubble has been clearly re-established as home prices are soaring out of reach again for most Americans. 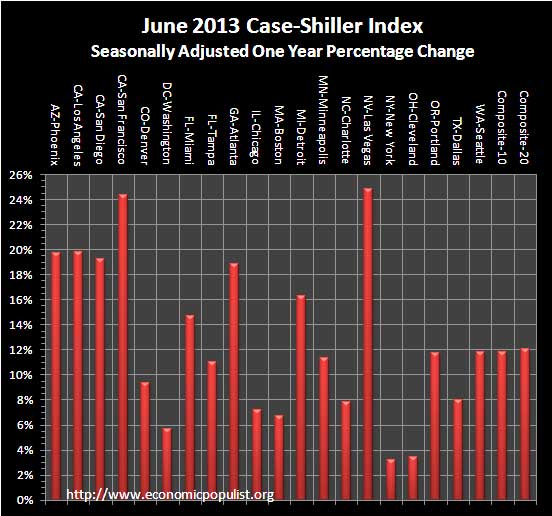 Below is the quarterly national index percent change from a year ago, now at 10.1%.   The national index also shows soaring prices and a return to not affordable housing.

Overall, the report shows that housing prices are rising but the pace may be slowing. Thirteen out of twenty cities saw their returns weaken from May to June. As we are in the middle of a seasonal buying period, we should expect to see the most gains. With interest rates rising to almost 4.6%, home buyers may be discouraged and sharp increases may be dampened. 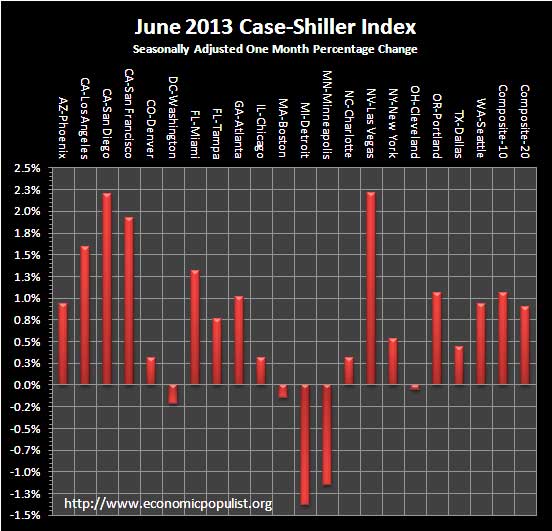 Below are the seasonally adjusted indices for this month.  The index itself tells you what has happened to home prices, per city, from the year 2000.  Only Detroit is below their 2000 home price values with Cleveland just barely at 2000 price levels. 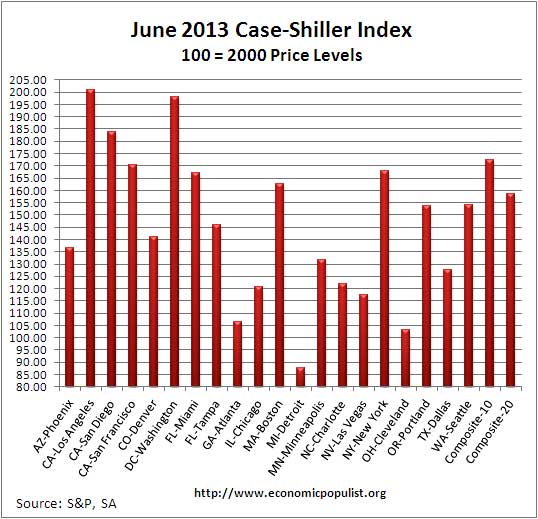