The BLS employment report shows total nonfarm payroll jobs gained were a paltry 74,000 for December 2013, with private payrolls adding 87,000 jobs.  Government jobs decreased by -13,000.  Worse, 40,400 of jobs gained were temporary ones.  That's over half, 54.6%, of December's jobs were temporary.   There is an another shadow cast over this report in that December is the 6th year anniversary from start of the great recession. The BLS employment report is actually two separate surveys and we overview the current population survey in this article.  The better news is November's job gains were revised upward, by 38,000 to 241,000 jobs.

The start of the great recession was declared by the NBER to be December 2007.  The United States is now down -1.165 million jobs from December 2007, a full six years ago.  EPI just performed an analysis showing America is really down 7.9 million jobs to return to pre-recession employment levels due to increased population growth over the last six years. Below is a bar chart showing the employer's payroll growth since January 2008.  We see health care jobs, part of education and health sector, is the only real growth sector, along with very low paying restaurant jobs in leisure and hospitality.  Professional and business includes waste management and many other low paying administrative types of jobs.  Professional and business also hold the temporary jobs.  Manufacturing has just been decimated, which had little to do with the housing bubble and financial crisis. 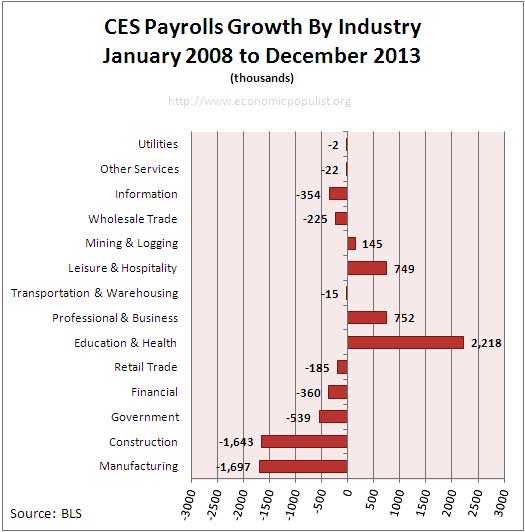 Job gains for the past year are 2.186 million and the breakdown is shown below.   While one might think professional and business jobs are good jobs, this isn't quite true.  There are many low paying office worker and waste management services jobs in this category.  Additionally the BLS counts foreign guest workers in their employment statistics, so in the Science & Technology fields, don't assume those jobs went to Americans. 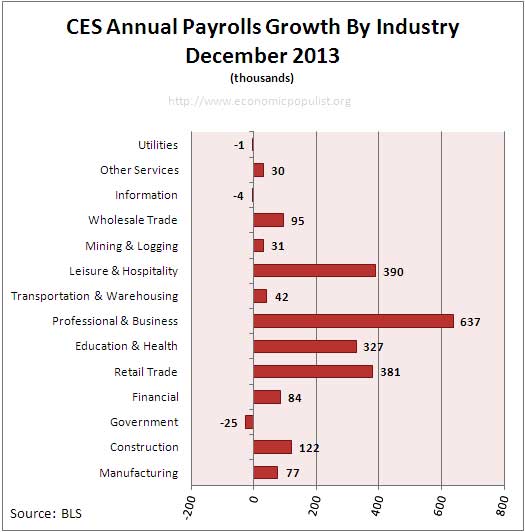 Below is a bar chart of the payroll gains by industry sector for the month.  Within Professional and Business jobs, 40,400 of the gains represent are temporary work, which means the sector lost jobs, specifically -24.5 thousand accounting and bookkeeping jobs. .  Surprising, Health care actually lost jobs.  Retail trade are primarily low paying jobs such as working at grocery stores and gas stations.  The month is so piss poor in job growth one must wonder if someone made a typo. 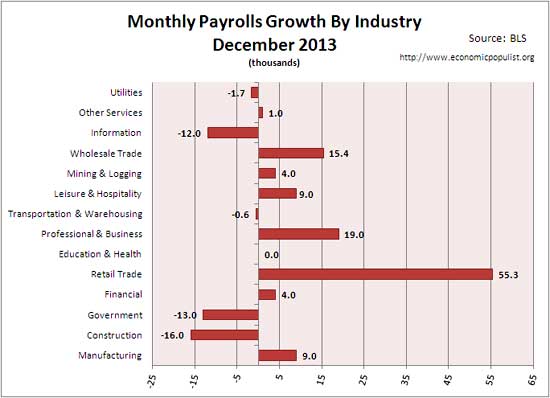 Below is a graph of auto & parts manufacturing, which this month gained 1,000 jobs. Government overall gained -13,000 jobs for the month, but these were local government education jobs which declined by -14.9 thousand.  Generally speaking austerity has taken it's toll on government jobs as has replacing public service sector workers with private contractors. While pundits and the press like to assume residential real estate will save the nation, it is fairly obvious many of those lost construction jobs will not return.   This month construction lost -16,000 jobs, all due to Nonresidential specialty trade contractors where employment declined by -12.9 thousand.  The report mentioned unusually cold weather as a cause for the job losses.  This might very well be true and one must wonder if the entire report was impacted by weather. Education and health services had no change.  This is a rarity as the only thing that has truly grown since the recession are jobs in health care. Corporate lobbyists scream there is a worker shortage in skilled labor, which is clearly false when one looks at the lack of job gains and flat wages.  Yet temporary help services is also part of professional and business services sector.  The job gains since January 2008 are 752 thousand, yet 273.7 thousand, over a third of these much touted jobs are actually temporary help jobs.  Below shows the gains of temporary jobs. The information sector lost -12 thousand jobs.  This includes newspapers and film production so no surprise with so many technological disruptors this sector is really shrinking. Transportation and warehousing are jobs as one would expect from the sector title, airline workers, truckers, working in warehousing and employment associated with trade, such as port dock workers.  This month the sector lost jobs and for the year has only gained 42,000 jobs.  Couriers and messengers are included in this figure, yet the decline might be seen as related to the goods are being moved around the nation. Leisure & Hospitality has the lowest paying jobs of them all.  This month the sector gained 9,000 jobs with14.4 thousand of those jobs in hotels, motels and restraurants.  Food service can even pay below minimum wage.  Just restaurant and bar workers alone account for 734,000 jobs gained since the start of the recession and is graphed below.  In other words, the job growth America is getting is in jobs which cannot even pay rent, never mind build a future on. 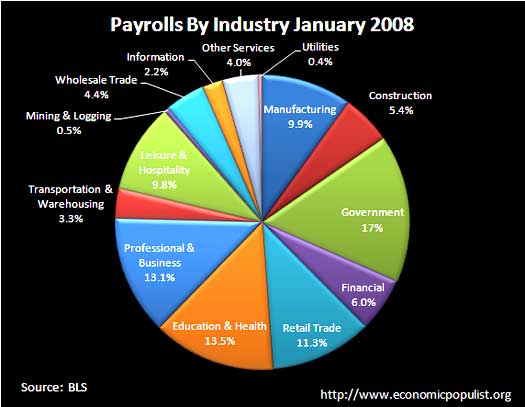 Below is the breakdown of jobs growth per industry sector for December 2013.   From these two pie charts we can see the job market has changed into more crappy, low paying service jobs of health care assistance and restaurant workers.  We expected to see construction jobs shrink relative to total payrolls and it did, by 1.1 percentage points.   Manufacturing, of which the auto industry is a part, has contracted 1.1 percentage points as share of total jobs.  The financial sector, only shrank 0.2 percentage points as it's share of payroll jobs, in spite of being the maelstrom behind the recession.   Leisure & Hospitality has expanded by 0.6 percentage points.  Health care has gained the most jobs, yet working in a nursing home and as attendants are also low paying jobs.  The only good news is mining and logging has expanded and these jobs usually pay well. 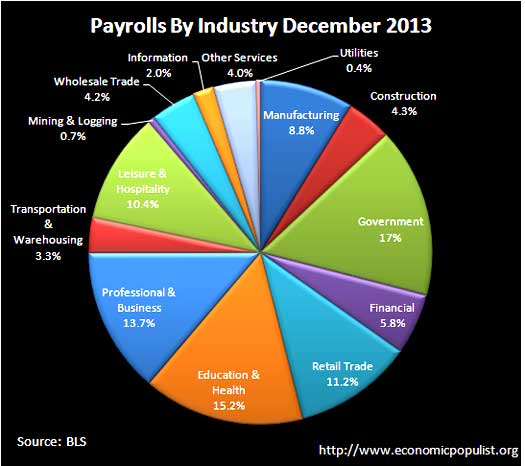 We actually believe December payrolls was so low is due to the bone chilling weather, more and more businesses just do not hire during the Holidays and other factors which would make the initial report artificially low.  In other words, this months anemic job growth is probably an anomaly.  That said, even with the solid Fall job gains we can see for the year payroll growth is really not enough to get people back to work.  Additionally good jobs are a dying breed and the types of jobs being created won't even pay the most basic living expenses.  Don't let this terrible report fool ya.  This isn't just a one month disappointment.  The terrible employment situation has been going on for six years with no end in sight.

Here is our overview of the unemployment statistics.

John Williams, president of the Federal Reserve Bank of San Francisco: "I think the majority of the decline in the participation rate is due to structural factors related to the aging of the population and people going into disability.

that there are plenty of jobs, that it's just a bunch of people getting old and retiring?

These seem awfully close together. It is funny that they can't get their messages straight, yet they take the same tone. Is this "repeat the lie often enough it becomes true" prop?

Because from the stats here and at Mish's site and JOLT and BLS, it sure seems like there simply aren't enough jobs, companies are taking profits rather than invest, and that retirement is really, really not affecting the participation rate to the extent they would like for us to believe.

We should be awash in old people laying around or driving their RV's up and down the street, but I see darn few that aren't working, or trying to. On the other hand I can't turn around without bumping into an unemployed 25-55 year old, also out of work.

There is some political spin to try to claim it is retirement, but any statistical analysis by age, using the correct time windows, which much be either annual or moving averages that are based on annual data, will show only about 0.1 percentage point in 2011, 2012 and the last calculation I did was for August 2013, on is due to retirement, the rest is 25-54 dropping out of the labor force.

Folks, I take the time to calculate these things from raw data plus graph them and it takes all day.

Consider reading them and trust the math. If I made a mistake, correct me but frankly labor participation rate is a simple math calculation and anyone with some basic math skills can verify the false claim the drop is due to retirement with similar math exercises.

This is not theoretical, the data is there to simply do a reality check, crank the numbers.

Bernanke acknowledges that in every press conference and he's right. Remember, this guy is a Professor, he can do the math.

The math is the key anyone can spin numbers by adding statistical bias and wrong assumptions.

"About 4 million more people than before the recession are unemployed today...Some of the decline in labor force participation since 2009 is due to the baby boomers retiring, but even among prime-age workers—those aged 25 to 54—the participation rate is down significantly. This suggests that other factors, such as low prospects of finding a job, are playing a role ... It's accurate to say the country has a large number of people in the so-called 'shadow labor force' ... There is also the issue of underemployment. Many Americans are working fewer hours than they would prefer because their employers are offering them only part-time work ...To sum up, these comparisons of employment data suggest that the labor market is not as healthy as the improved unemployment rate might indicate. The unemployment rate drop may overstate progress achieved...It's worth noting that wage and salary income growth remains weak."

* In other words, nothing has changed for the last 5 years.

There ya have it and they have the population calculator. Everything I've read coming out of the Atlanta Fed has been calculated accurately, so he's going off of that.

Possibly some spin research out of any Fed branch research division but I've yet to find it from the Atlanta Fed. They do excellent work and checking out their blog is a good idea, loaded with great analysis most are not looking at.