NAR's existing home sales jumped to yet another record high.  Sales were up 2.0% to 5.59 million, a high not seen in over eight years.  In February 2007 existing home sales were 5.79 million.  Sales are 10.3% higher than a year ago.  Existing home sales have been above their year previous amounts for ten months in a row now.  First time home buyers just hit their lowest share of existing home sales since January, clearly being priced out and unable to meet the still strict mortgage requirements to buy.   Prices are through the roof and inventories are tight. 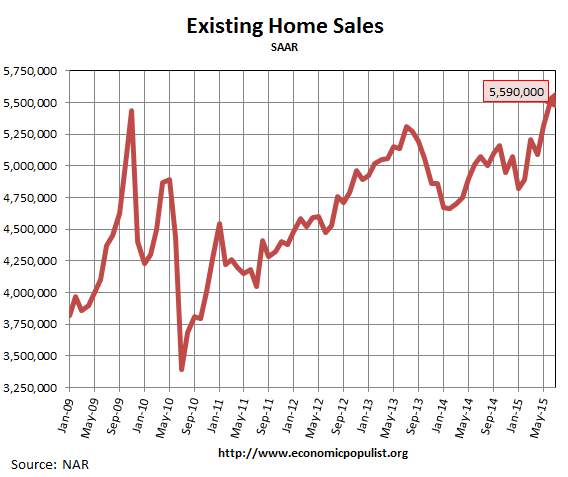 The national median existing home sales price, all types, is $234,0000, a 5.6% increase from a year ago.  This is just slightly down from last month's $236,300 median price record and still beats the previous $230,400 July 2006 high.  The annual median price has also increased for 41 months in a row.  Even when adjusting for inflation, prices are increasing at housing bubble rates.  The average existing sales price for homes in February was $278,000, a 3.9% increase from a year ago.  Below is a graph of the median price. 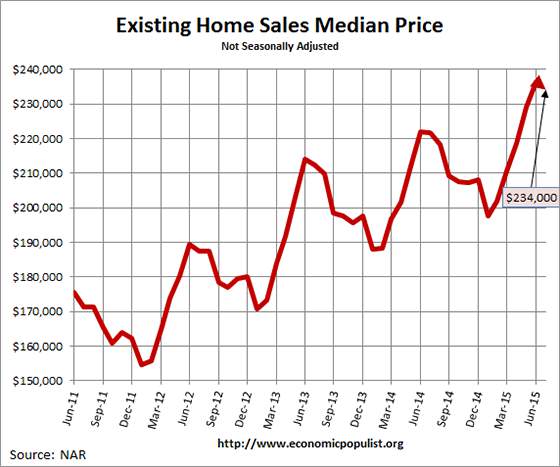 NAR Economist Yun finally nails the obvious in his below comment.

Despite the strong growth in sales since this spring, declining affordability could begin to slowly dampen demand. Realtors® in some markets reported slower foot traffic in July in part because of low inventory and concerns about the continued rise in home prices without commensurate income gains..

The fact that first-time buyers represented a lower share of the market compared to a year ago even though sales are considerably higher is indicative of the challenges many young adults continue to face. Rising rents and flat wage growth make it difficult for many to save for a downpayment, and the dearth of supply in affordable price ranges is limiting their options.

The median time for a home to be on the market was 42 days.  Short sales by themselves took 135 days, foreclosures in 49 days and non-distressed homes took 41 days.  Housing inventory from a year ago has decreased -4.7% but is down -0.4% from the previous month.  Current the 2.24 million homes available for sale are a 4.8 months supply.  That is -14.3% lower month's supply than a year ago, showing just how tight the existing home sales market is now.

Below is NAR's breakdown by existing home sales type and regions.  The west has the most unaffordable housing consistently.  The west's $327,400 median price means the mortgage payment is way beyond the wages of all but 2% of the nation.

Here are our past overviews of existing home sales not revised.