The never ending Greek tragedy goes on and on, with bail outs, austerity demands (codespeak to screw the poor and middle class), and votes of no confidence in government officials. All of this raucous is interspersed with violent protests. Now Europe is in talks for a second bail out, about the same as the first one, or $157 billion.

The EU and ECB refuse to let Greece default and insist the new bailout should guarantee no adverse credit event. Greece's debt is now about 150% of annual GDP, heading to 160%, or $485 billion, with some estimates of Greek debt being $532 billion. Add to this, Greece's economy is shrinking, which will never enable them to pay off this debt. This is what austerity brings, social unrest and a non-productive economy, as the Prime Minister tries to blame inept workers.

Below is a graph of countries' exposure to Greek debt from BBC news. 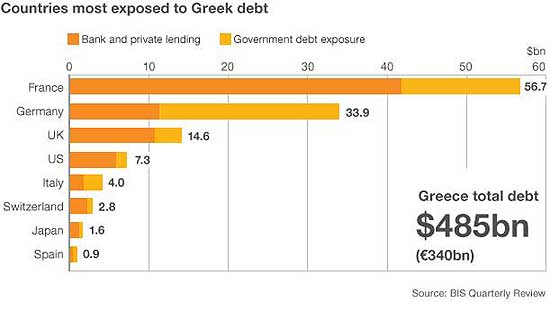 Yet, Economist Kash Mansori did a little more digging and found the United States exposure to Greece debt much higher, $41.4 billion and that's just Greece. 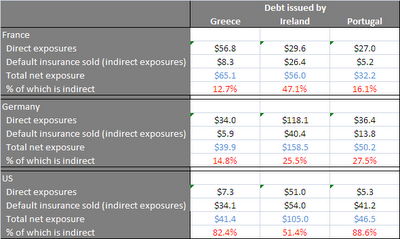 Mansori has done more work in trying to ascertain U.S. bank exposure to the European debt crisis and received quite a bit of denial blow back as financial stocks declined in response. Bottom line, he stands behind the $41.4 billion of Greek crisis U.S. exposure.

In other words, the BIS data does indeed represent true net exposure, and in the case of US banks that exposure is about $40 billion to Greece, on par with the exposure faced by banks in France and Germany. No, we don't know exactly how much of that takes the form of CDS contracts, but we do know that the exposure is there.

Citigroup highlighted in a research note that such a move could undermine the use of CDS as a tool to hedge against sovereign risk more generally.

While Citigroup and other U.S. banks are pressuring for Greece to avoid default, for then they would have to pay out on CDSes, €5 billion, in the big scheme of things, is not that much. Considering the games being played, most of it on the backs of working people in the forms of austerity, the odds are Mansori's estimate is correct.

Remember that shtick how the taxpayers had to bail out the banks in order to save the economy for working people? Remember how banks would lend to small business and individuals? Right o, we know that banks did not do that Instead, they appear to have re-entered the great derivatives gambling hall by placing bets that Greece would be bailed out.

So, what exactly is keeping Greece from being able to default on some of it's debt? The banks. Even the interest on the debt, now currently 6.6% of GDP, projected to be 8.8% of GDP by 2014, isn't being forgiven.

We have a never ending spiral of bail outs, social unrest and a never ending shrinking Greece economy, double whammied due to austerity demands and interest on the debt. This never ending saga is now to be stretched out, like picking at a scab underneath a band-aid, instead of getting the pain done and over with in order to help Greece actually economically recover.

Tune in for the Next Stop in the European Debt odyssey - Off to Circe! ~

Watching the goings on in Europe are ridiculous but the latest is they cannot agree and want Greece to "cut more debt".

You have to love the Greek spirit -- We don't owe anything, we won't pay anything! Let the French workers show some solidarity with the Greek people -- they know how it's done! Why do we work and go to war to support the lifestyles of these elites? In 1947-49, we helped the Greeks bring down the communists because they were declared Stalinists (actually, they were more Titoist, but guilty of bad behavior toward the people). Today, it's the politicians and bankers in Armani suits who are guilty of bad behavior toward the people. Why the hell should they have to sell the Parthenon to Disney just to pay off some CDS speculators? If you're going to have austerity anyway, why not have repudiation and some criminal trials with it?
BTW: Have the Germans ever paid for destroying the Corinth Canal? Why should the Greek people have to pay their electric bills to a bunch of rent-seekers in Germany?

Remember it was Société Générale who received huge AIG CDS payouts as well as loans to the U.S.

Once again, the people vs. the banks. More and more economists are spelling it out that these Banksters need to plain take a haircut on the debt. There is no way Greece can pay this behemoth back.

French Banksters and banks will never suffer. In the recent disclosure of Fed lending 2008-2010, we saw how 70% went to foreign
banks. If the French do take a 'coup de cheveux', the Fed will bail them out. Once again, the american worker and small business will be starved of credit.
But this is how Empires are supposed to work: work for the elites who control the Empire.

No other theory explains the behavior of the Oligarchy except a theory
of Imperialism. Wages under capitalism have returned to the downward spiral of the
last 250 years. The brief respite of wage gains from 1942 to 1975 was based on the
Empire's need to win big wars. The wars now are small, and the wars will continue.

They sure did save and lend to foreign banks but I don't recall a 70% total. Reference?