The DOL reported people filing for initial unemployment insurance benefits in the week ending on October 5th, 2013 was 374,000, a 66,000 increase from the previous week of 308,000.  We've seen strange soarings in initial claims before yet this was unexpected, so what happened? The explanation for why initial unemployment claims jumped was 33,000 are from California backlogs and 15,000 from non-federal workers laid off, directly affected by the shutdown, according to the DOL.  That leaves an additional 18,000 increase if the DOL claims are true.  The almost million furloughed Federal workers do not apply for or are counted in initial unemployment claims, they have a different unemployment insurance program, so they are not the cause of the jump.

While many are dismissing this report as an anomaly, we think not.  The government shutdown is starting to have real ripple effects.  By October 5th, the shutdown had only been in effect for five days and odds are many who qualify for unemployment insurance who are losing their jobs as a result, did not even file.  At this point the shutdown was perceived to be temporary, yet even if this is still true, temporary disasters still can have long lasting ripple effects. 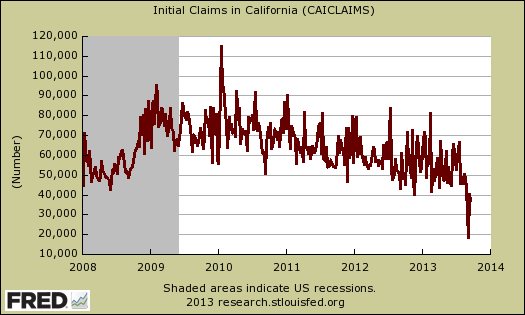 When we take just a year of California not seasonally adjusted initial claims we see for the weeks of September 14th and 21st, initial claims returned to normal levels from California.  State published initial claims statistics have a week delay so we won't know this week's October 5th figures from California until next week.  Still, a sudden backlog of 33,000 is really unusual, it would put the initial claims weekly figure from California to 70,000, which hasn't been seen since the beginning of 2013.  Bottom line, we think there is more to this story than a computer glitch and updates, and suspect some of these 33,000 claims are not backlogs, but simply more people losing their jobs due to the government shutdown and/or slowing economy. 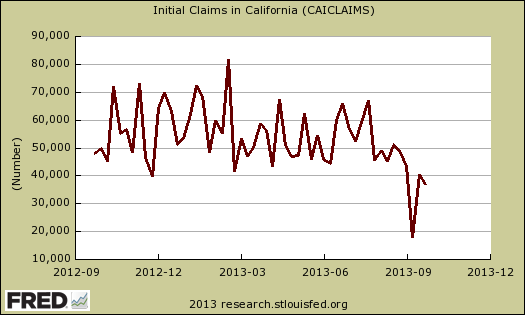 Below is the mathematical log scaling of initial weekly unemployment claims.  A log scale helps remove some statistical noise, it's kind of an averaging and gives a better sense of a pattern.  As we can see, we have a step rise during the height of the recession, but then a leveling, then a very slow decline, or fat tail.  That fat tail has taken over six years to return to early recession levels, so the time it has taken to drop is also a concern.   There are a lot of people out there who are not counted in labor force statistics who need a job.

Last week we correlated initial claims to payrolls in this article and since we have no monthly employment statistics due to the shutdown, we suggest giving it a read.

For the week, the DOL reports continuing unemployment claims for the previous week was unchanged by percentages and there are still large numbers of long term unemployed.  The below continuing claims figure doesn't include those receiving extended and emergency unemployment benefits.

In the week ending on September 21st the not seasonally adjusted, the official number of people obtaining some sort of unemployment insurance benefit was 4,028,411 with 1,442,484 people receiving 2008 EUC, which was extended to January 2014.  There were 11.3 million official unemployed in August.  The number of unemployed has remained almost static for some time.

As much as people wish it so, most government data is not complete and not real time.  We have repeatedly warned, ad nauseum, do not bank on the initial claims number reported in the press release for that week.  Initial claims for unemployment benefits is a weekly statistic and that implies a very short time window for data collection, it is always revised the next week, almost always upward.  One can have unusual events which throw off the seasonal adjustment algorithm.  One can have missed timing of events that can also throw a monkey wrench in one week's worth of data.  As we pointed out in our weirdness in initial unemployment claims article, states might not report their quarterly adjustments for emergency unemployment benefits and we had the infamous fiscal cliff push past the final hour, which included extending those unemployment benefits for the long term unemployed last year. Yet for this week, there is no reported quarterly adjustment.