Total Industrial production is still down -4.7% from pre-recession levels, in other words going on 4 years, even while up +2.9% from December 2010. The Fed also reports capacity utilization, is -2.3 percentage points below the entire 1972-2010 average, but is up 2.0 percentage points from a year earlier.

Below is the Fed's description of Market groups from the report and their monthly percent changes.

The production of consumer goods gained 0.2 percent in December and moved up at an annual rate of 1.1 percent in the fourth quarter. The output of consumer durable goods rose 0.3 percent in December, with increases in the indexes for automotive products, home electronics, and miscellaneous consumer durables partially offset by a decline in the index for appliances, furniture, and carpeting. The output of nondurable consumer goods rose 0.2 percent, but the index declined at an annual rate of 0.7 percent for the fourth quarter. In December, the production of non-energy nondurables advanced 0.7 percent, with gains in all of its component indexes other than clothing, while the output of consumer energy products decreased 1.0 percent.

The production of defense and space equipment fell 1.3 percent in December but advanced at an annual rate of 6.1 percent in the fourth quarter.

Among nonindustrial supplies, the production index for construction supplies increased 1.0 percent in December. The output of construction supplies rose at an annual rate of 1.2 percent in the fourth quarter, its eighth consecutive quarterly gain. Nevertheless, the index remained more than 20 percent below its level preceding the recent recession. The production of business supplies increased 0.3 percent in December but fell at an annual rate of 1.9 percent for the quarter as a whole.

Below is the industrial production graph for construction, in black, where we can see this entire sector is still decimated after the housing bubble burst and is over 20% below pre-recession levels. Construction supplies increased 1.0% this month and are up 4.6% since December 2010. 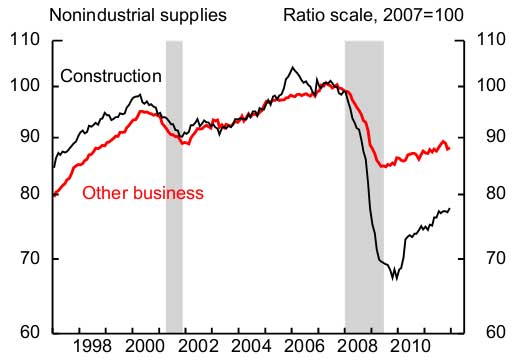 Below is another graph of industrial production since September 1990, indexed to that month. Look at the slope, the growth through the 1990's and then compare to 2000 decade. It was in 2000 when the China trade agreement kicked in and labor arbitrage of engineers, advanced R&D, I.T., STEM started in earnest. This overview was truncated due to it's late date publication. The Federal Reserve releases detailed tables for more data, metrics not mentioned in this overview.

I normally create capacity graphs but due to the SOPA/PIPA did not this month due to playing catch up. But the AAM did and you should check out their manufacturing capacity graph.