Payday loans have to be the poster child for exploiting the poor.  People should never get a payday loan.  Selling blood or begging in the streets is a better option.  The Pew Chartable Trust has been on the warpath to expose these exploitive sorts of financial ripoffs which it turns out are quite the profitable business.

Twelve million Americans take out payday loans each year, spending approximately $7.4 billion annually at 20,000 storefronts and hundreds of websites, plus additional sums at a growing number of banks. Though they are marketed as short-term products for temporary needs, payday loans are typically used for ordinary expenses not unexpected emergencies. The average customer ends up indebted for five months and pays $520 in finance charges.

Some of these loans are charging interest rates of 500% and Pew reports the average person taking out a payday loan coughs up $520 in interest and finance charges for just $375 in principle.  Who needs the mob and loans sharks when we have payday loans?

With 15 states banning payday loans, a growing number of the lenders have set up online operations in more hospitable states or far-flung locales like Belize, Malta and the West Indies to more easily evade statewide caps on interest rates.

While the banks, which include giants like JPMorgan Chase, Bank of America and Wells Fargo, do not make the loans, they are a critical link for the lenders, enabling the lenders to withdraw payments automatically from borrowers’ bank accounts, even in states where the loans are banned entirely. In some cases, the banks allow lenders to tap checking accounts even after the customers have begged them to stop the withdrawals.

While the banks deny any wrongdoing, Pew Charitable Trust says a full 27% of the people who get payday loans are having their checking and savings accounts go into overdraft due to banks allowing payday loan creditors to make automatic withdrawals.   Even though Federal Law is supposed to allow a bank account holder to stop authorized bank account withdrawals, many banks are ignoring their customers and letting payday lenders plunder these accounts anyway.  Those withdrawals are sending bank customer's accounts into overdraft with all of those corresponding penalties and fees.  Turns out that's quite a profitable business for the banks.

Only 14% of those who take out payday loans can actually afford the payments so what happens is their accounts go into overdraft, charging more fees and they end up being buried in much worse debt than ever before.   According to Pew Charitable Trust, 51% turn to further desperate measures to pay off the original payday loan.  Below is the graph on the absurdity on trying to pay back payday loans when one is living paycheck to paycheck as it is. 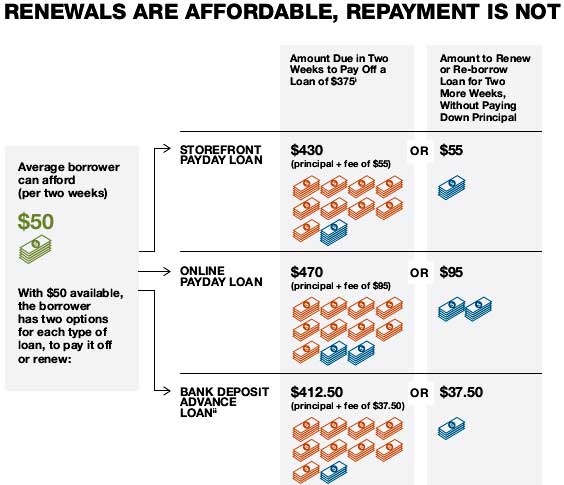 Many of these borrowers ultimately turn to the same options they could have used instead of payday loans to finally pay off the loans, including getting help from friends or family, selling or pawning personal possessions, or taking out another type of loan. One in six has used a tax refund to eliminate payday loan debt.

The New York Times claims both the FDIC and the newly formed Consumer Financial Protection Bureau are investigating the major banks, in particular Wells Fargo who moved into payday loans around 2010.   They are in particular focusing in on Internet payday loans, which skirt around state laws which either ban these loans outright or cap the interest rates payday lenders can charge.

The Federal Deposit Insurance Corporation and the Consumer Financial Protection Bureau are examining banks’ roles in the online loans, according to several people with direct knowledge of the matter. Benjamin M. Lawsky, who heads New York State’s Department of Financial Services, is investigating how banks enable the online lenders to skirt New York law and make loans to residents of the state, where interest rates are capped at 25 percent.

Congress has yet to really act, although Senator Merkley has introduced legislation to try to stop banks from skirting around the laws.   Introducing a bill means nothing these days where most legislation which gets passed is simply corporate lobbyists yearly wish lists.

The SAFE Lending Act would crack down on the worst practices of the online payday lending industry and give states more power to enforce already-existing rules to protect consumers from predatory loans.

There is simply something wrong with a society that preys on the vulnerable, and demands their pound of flesh at a time when that person is already on the edge of the abyss.  Yet over and over again, this mentality of picking off the weak like a pack of wolves hunting the wounded gazelle is endorsed as good business and a place for profits, applauded by Wall street.