The Federal Reserve's Industrial Production & Capacity Utilization report, G.17, shows a 0.6% increase in industrial production for July 2012, an improvement from recent months. Manufacturing increased 0.5%, mining 1.2% and utilities 1.3%. June industrial production was revised down, from 0.4% to 0.1% and May revised up from -0.1% to 0.2%. This report is also known as output for factories and mines. While total industrial production has increased 4.4% from July 2011, the index is still down -2.0% from 2007 levels, that's right, five years. Here are the major industry groups yearly industrial production percentage changes from a year ago. Utilities is fairly surprising, considering the drought and heat domes.

Below is the Fed's description of Market groups from the report and their monthly percent changes. The report also gives annualized rates and bear in mind these are much higher than monthly percentage changes by their nature. Autos are doing well.

The output of defense and space equipment rose 2.8 percent in July, as workers returned from a labor strike at a major military aircraft manufacturing facility. The gain nearly reversed the declines in the previous three months; the level of the index in July was 5.2 percent above its year-earlier level.

Among nonindustrial supplies, the output of construction supplies decreased 0.5 percent in July. The index has fallen in four of the past five months. The production of business supplies rose 0.3 percent in July after having edged down in the previous month.

Below is a graph of just the manufacturing portion of industrial production. Below is another graph of industrial production since September 1990, indexed to that month. Look at the slope, the growth through the 1990's and then compare to 2000 decade. It was in 2000 when the China trade agreement kicked in and labor arbitrage of engineers, advanced R&D, I.T., STEM started in earnest. We see many economic metrics which are known to use offshore outsourcing start to flatten around year 2000. Capacity growth is not to be confused what what is being utilized. Instead, this is the actual growth or potential to produce. Capacity is the overall level of plants, production facilities, and ability to make stuff, that we currently have in the United States. Think about a new factory being built, or a factory shut down and it's machinery sold at auction and shipped to China. This is capacity. Capacity growth overall has increased only 1.4 percentage points from July 2011. Below is the capacity growth increase from a year ago.

According to the report for 2011, manufacturing uses 77% of capacity, with durables and nondurables each about 50% of that. Utilities use 10.3% and mining 12.8% in 2011 (rounded) to give a ratio of manufacturing vs. mining and utilities in terms of capacity. Selected high tech industries holds a measly 3.45% of the industrial portion and with computers only 0.44% and communications equipment only 0.66%. Below is the graph for high tech industries capacity. We can almost plot the move to manufacture in China from the slope. 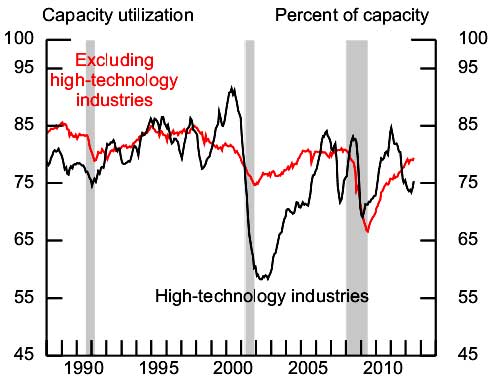 The Federal Reserve releases detailed tables for more data, metrics not mentioned in this overview, although we hope to have explaining some of the more confusing aspects of the industrial production report.

If you are baffled by what crude, finished mean from the G.17 report, read these stages of production definitions. Stages of production have implications for exports and imports. Finishing industrial production implies goods for final sale and thus what kind of output one will see for the month.