The latest jobs report shows that, once again, over a quarter of a million people have dropped out of the labor force. So should we celebrate Labor Day for just being lucky enough to have a job — any job at all?

The prominent economist and Nobel Prize winner Joseph Stiglitz (and a Fellow of the progressive Roosevelt Institute) says: “An economy that doesn’t deliver for most of its citizens is a failed economy.”

That sounds like a failed economy: When most increases in productivity (growth/profits) since 1973 went to company executives and investors, and not shared with the workers. Do we celebrate that? 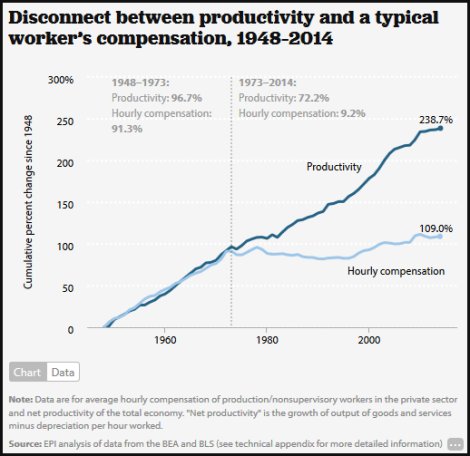 America has not been doing well in either equality of outcomes or opportunity. We have obtained the dubious distinction of being the country with the highest level of inequality of outcomes, and among the lowest levels of equality of opportunity, compared to other advanced economies ... the American dream today is to a large extent simply a myth. The life prospects of a young American are more dependent on the income and education of his or her parents than in almost any of the other advanced countries. Wages and benefits for American workers grew at the slowest pace in 33 years in the second quarter this year..."

From another recent report by the Economic Policy Institute: How the Economy Has Performed for Workers This Year

New York Times: Employers Exploit Unauthorized Immigrants to Keep Wages Low: "Competition with lesser-skilled immigrants can be a problem for low-wage-earning native-born workers during a recession or a time of high unemployment." (Study: PDF)

A landmark study found that 37 percent of unauthorized immigrant workers were victims of minimum wage violations. An astounding 84 percent who worked full-time were not paid time-and-a-half for overtime when they worked more than 40 hours in a week.

The bargaining power of U.S.-born workers competing in the low-wage labor market is undercut when millions of unauthorized workers cannot safely complain to the Labor Department or sue for unpaid wages.

But the biggest single culprit in the growth of wage inequality has been deunionization. The only way to achieve sustained wage growth is if American and immigrant workers organize and build power together through unionizing and collective bargaining.

But the GOP has been fighting labor unions since the dawn of time. Since the Powell Memo in 1971, we've seen "right to work" state laws flourish and the subsequent decline of union membership (because uninformed people often vote against their own best interests, and the GOP wants to keep them "dumbed down".)

What reasons do we have to celebrate Labor Day during these days of stagnate and declining wages?

Do we celebrate a growing number of part-time and "on call" jobs in this new "gig" economy — where everyone will have to scramble from one job to the next to earn a living — instead of just going to a regular 40-hour-a-week job that offers paid sick days, paid holidays and vacations, good healthcare and a solvent pension plan?

Currently on this Labor Day we have 94 million working-age Americans not in the labor force. We have 149 million who are employed — but 50% of those who are paid wages take home $24,000 a year or less. Should we celebrate this?

Both the Labor Force Participation Rate and the Employment-Population Ratio hasn't been this bad in decades. Do we celebrate a decline in the labor force and a lack of labor representation? With a lack of jobs and the low pay, a Universal Basic Income may be needed in the future.

But in the mean time, what's is there celebrate? For many people, Labor Day is not even a paid holiday any more. 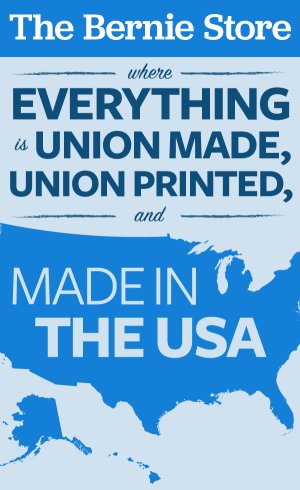 A restaurant in San Francisco ("Eatsa") is the first in a restaurant chain with national ambitions: To be almost fully automated.

There are no waiters or even an order taker behind a counter. There is no counter. There are unseen people helping to prepare the food, but there are plans to fully automate that process, too, if it can be done less expensively than employing people.

Automation is transforming every industry. Business owners look to substitute machines for human labor. It happened to blue-collar workers in factories and white-collar workers in banks and even law firms. With self-driving vehicles, it may happen in the taxi and trucking industries. Robots and artificial intelligence machines are expected to transform health care.

"This Labor Day, it's time for the U.S. to catch up with the rest of the world."

* I used to live in Philly and didn't know that David Cay Johnston was once an investigative reporter for the Philadelphia Inquirer. This post he wrote is (as usual) spot on.

I kid you not, here it is an economic site focused on middle class, the "rest of us", economics and I personally completely forgot about labor day.

*That* is how badly the holiday and labor are forgotten, into the dust with a heap of historical labor photographs when there was a labor movement in the world.