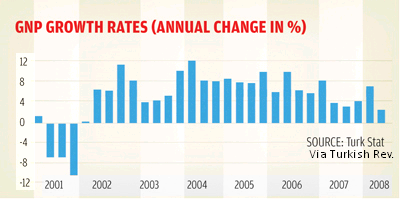 The Turkish people elected a new government in 2002. Recep Tayyip Erdoğan became Prime Minister after his AK Party gained an absolute majority in the nation's unicameral legislature. Erdoğan and AK have governed continuously from 2002 through the present.

During the critical period that included the global recession, Turkey fared better than most industrial nations. (Trading Economics)

Negative growth hit Turkey in only three quarters, with a solid rebound starting in 2009. Forth quarter 2010 economic growth was 9.2%. Only China led Turkey during that time with 9.8% growth.

The International Monetary Fund (IMF) announced an end to its formal agreement with Turkey in 2010. In fact, the Turks ended IMF involvement with economic management in 2007 when they rejected IMF's "austerity" requirements for a stand by loan. Since that time, Turkey has paid off 75% of its IMF debt and managed the economy without IMF help.

Highlights - How they did it

Motor vehicle production increased by 27 percent to 983,000 units between January and November 2010.

Employment in the industry sector rose by 5.5 percent year-on-year in the third quarter of 2010.

December 15: TurkStat said that unemployment rate dropped by 2.1 points to 11.3 percent in September 2010 compared to the same month of 2009.

Five Turkish companies have won a tender to construct "Baghdad New Sadr City" to be comprised of 75,000 dwellings.

Business organizations from Turkey, Syria, Lebanon and Jordan formed the Levant Business Forum and adopted an action plan to carry out joint projects on integration of these economies. Turkish economy in 2010, January 1, 2011

How could this happen?

The Turkish government focused on manufacturing and foreign trade.

The Turkish Central Bank offered a consumer credit interest rate that allowed people to pay off their debts.

The nation became the leader and ally of the nations that the Ottoman Empire occupied for centuries, standing as a counterpoint to nearly three decades of United States military actions, invasions, and general hostilities in the Middle East.

The Turkish Finance Minister, Mehmet Simsek , recounts how the government dealt with the issue of local debt:

"In 2009, I had an urgent meeting with nearly 2,000 mayors in Antalya. Everyone at that meeting expected me to say I was going to give them more money. On the contrary, I raised the deficit issue, telling them that this could not go on any longer and that they should get back on track. As a result, we shifted away from a deficit of some TL 7.1 billion in 2008 and achieved a surplus of over TL 1 billion last year…" Today's Zaman, May 26

For years, Turkey has sought admission to the European Union. The fiscal policies over the past decade stressed EU admission criteria. Now, it seems, the pupil has become the teacher. One has to wonder, will Turkey join the EU if invited?

This article may be reproduced with entirely or in part with attribution of authorship and a link to this article.

Frankly, I never have looked at them but most interesting considering the state of their neighbor.

Did they also blow off Goldman Sachs on any "loans"?

They're not doing business with Goldman Sachs and especially not with the IMF. We have a government here that told IMF to stuff it on demanded austerity programs. That makes two along with Iceland.

Their neighbors, the Greeks, are getting the royal treatment from the EU and the Goldman touch of death also. The best thing the Greeks could do is get over the "centuries of conflict" b.s. and make Turkey an active trading partner and ally. They won't but they could.

And how about this: "The Central Bank dropped maximum monthly interest rate for credit cards to 2.26 percent from 2.44 percent for Turkish lira transactions." You think this government cares about the citizens? I'd say YES they do.